With the most powerful telescope in the world coming up in Chile, our view of the final frontier is sure to become larger and clearer 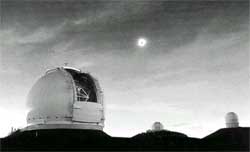 about 400 years after Galileo revolutionised the study of the Universe, a telescope will be commissioned on a 2,600-metre peak in northern Chile. This will be a vast improvement on the existing telescope technology. The Very Large Telescope (vlt) will, so obviously, be the largest in the world with a light gathering capacity about 100,000 times that of Galileo's original.

The European Southern Observatory (eso), the agency responsible for building the telescope, selected the site at Cerro Paranal in the Atacama desert of Chile because of its clear, dry air. The place has about 350 clear nights in a year, making it the ideal place for star gazing. It has a very dry atmosphere with very little rainfall -- crucial for infrared observations. Though the project has been in the pipeline since the late 1980s, construction started only in the early 1990s. The first scientific observations are scheduled to begin in mid-1999, while the project will be fully functional in the year 2001 (Science , Vol 280, No 5364).

For a long time, the largest telescope in the world was the Hale telescope at Mount Palomar Observatory in California, usa . It was built in 1948 and its mirror had a diameter of five metres (m). It led to many important discoveries. In 1992, the Keck telescope at Mauna Kea observatory in Hawaii was commissioned. This was a technological marvel, its mirror 10 m in diameter. The improved technology and the fact that it was located on a 4,200-m peak made Keck the most useful instrument for observational astronomers. The recent results on the expansion of the Universe, the observations of gamma ray bursts and many other significant discoveries have been made possible by this remarkable 'eye'.

The vlt will further improve our visibility. It consists of four linked telescopes, each with diameter of 8.2 m, adding up to a 16.4-m telescope. The advantages of using four mirrors instead of one are clear. Casting a 16.4-m glass mirror with the perfection required for telescopes is impossible given the state of existing technology. Secondly, while observing a very dim source, the four mirrors can work in unison to collect as much light as possible. For normal observations, the vlt can function as four independent telescopes.

Another advantage of using four, separate mirrors is that the instrument can be used as what is known as an interferometer, which can measure the diameter of objects through interference patterns. The idea is to use extremely sensitive instruments to measure the differences in the light arriving at the four telescopes and then combining the information to get an image of unprecedented clarity. The image sharpness of the vlt will be comparable to a 130-m telescope. This feature will play a key role in answering some of the pressing questions in astronomy, such as the existence of planets around other stars.

To achieve this kind of image sharpness, a radical technology is being used in the facility. The light arriving from the four mirrors will travel slightly different paths, and hence, if not corrected, will lead to a blurring of the image. To compensate for this, the mirrors will be connected by optical delay lines to ensure that the light arriving from the four mirrors is in phases.

This involves a very sophisticated technology with mirrors mounted on movable carriages, which can move fast enough to correct the image. Other optical technology will also be used to correct the blurring of images. The telescope mirrors are only 18 centimetres thick and weigh about 22 tonnes each. To ensure that the effects of temperature and gravity do not lead to blurring, each mirror is supported on 150 computer-controlled actuators, which can adjust motion of electronic devices and will keep the mirror in the right shape.

With the first of the mirrors just installed, scientists at the vlt are busy trying to test and calibrate the instruments. The eso is proud of the fact that this is one telescope project which is on schedule and within the budget. When fully operational in the year 2001, the telescope will provide a unique opportunity to astronomers to unravel several unsolved mysteries of the Universe.