Use of groundwater accounts for 0.8 mm sea level rise 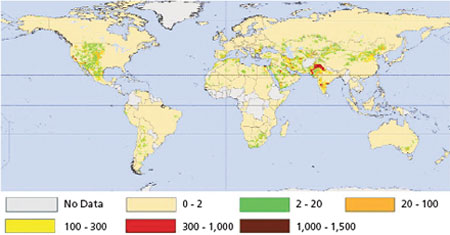 GROUNDWATER is becoming important to sustain agriculture, industry and drinking water. But as we exploit aquifers, more water becomes part of the hydrological cycle. A recent study shows evaporation and precipitation of groundwater is responsible for a fourth of the annual sea level rise of 3.1 mm.

The study, to be published in Geophysical Research Letters, employed a global hydrological model run with 44 years (1958-2001) of data of precipitation, temperature and evaporation. The researchers found contribution of groundwater to sea level rise is 0.8 mm per year. They were taken aback because this is surprisingly large when compared to the current annual rise in sea levels, which the Intergovernmental Panel on Climate Change estimates at 3.1 mm.

“We redid calculations several times because we did not believe it at first,” said Marc Bierkens, lead researcher and faculty of Geosciences at Utrecht University in the Netherlands. Groundwater, unlike surface waterbodies, is not susceptible to evaporation. Hence Bierkens and his team took into account the rate of groundwater depletion.

The model showed the rate at which groundwater stocks are shrinking has more than doubled in the past four decades, increasing the amount of groundwater lost in a year from 126 cubic km to 283 cubic km. Most of the depleted groundwater ends up in the ocean and is in excess of the current hydrological cycle, they concluded.

The research team had compiled the data over five years from the Internet, regional reports and interviews of regional specialists, Bierkens said. “We present a global analysis that does not presume to be 100 per cent accurate. Experts in the region could always find some points to scrutinise the results,” he added.