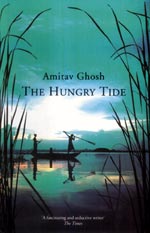 Some coastal animals have a rather ingenious ploy for sifting wheat mixed with sand. The mix is tossed into water whereupon, the sand settles down leaving the wheat afloat. Distinguishing historical fact from the fictive element in Amitav Ghosh's latest novel The Hungry Tide is not quite so simple. Ghosh treats the novel as a metaphor, an extension of his belief: "the poor in our country pay the price for our ideas of environmentalism."

As war breaks out in Bangladesh, dalits from the 'other' side of the chars (sandbars of the Sundarbans) are captured by the Indian army and relocated to Madhya Pradesh. But unable to strike roots in the unfamiliar environs, they decide to colonise one of the islands of the archipelago and create their own space.

The island they choose, Morichjhapi, is part of the Sundarbans barred to humans under the forest laws. The dalits however, decide to hold ground and ignore government orders to quit the island. One night, the government, keen to save the wilderness, sets loose a pack of hoodlums to butcher the villagers. This is part truth and partly what Amitav Ghosh makes of it.

The story is about Morichjhapi but the novel is about much more. Let's assume that the novel is a photograph. It then becomes easy to explain its composition, and Morichjhapi's position in the set-up. At the forefront of the novel are characters sketched so brilliantly that you can feel their fears and trepidations seep in with gulps of air as you read. These characters are located very much in the present, but their relation to each other is tied to a past painfully anchored in the Morichjhapi massacre. But Ghosh merely alludes to the massacre, and is careful not to launch into a discussion. The novel is thus subtly built, upon the reference to Morichjhapi.

In the process, Ghosh creates uncannily real characters, as anyone who has worked with in the forest fringes will vouch for. So real, that they risk being mistaken for stereotypes. Their joys and sufferings in all their starkness are equally convincing. Take for instance, the anguished cry of Kusum, an islander in Ghosh's novel. The policemen, government agents aiding resettlement of the islanders, argue: " "This island has to be saved for its trees, it has to be saved for its animals, it is a part of a reserve forest, it belongs to a project to save tigers, which is paid for by people from all around the world." " Then, a perplexed Kusum wonders: "Who are these people, I wondered, who love animals so much that they are willing to kill us for them?"
This is the first fiction in Indian English literature to challenge the idea of environmentalism in the country. In that, the novel breaks new ground. In the construction of the narrative too Ghosh tries new tools. He uses the tricks and methods of oral tradition in narrating stories and fables to launch into sub plots and new twists to his main plot. At times it jars and at times it helps build a pitch for the narrative. Yet, in comparison to his earlier novels the structure of the narrative remains relatively linear.

His positing the debate about poverty and environment is a tad simple. By keeping the story (reality or fiction) of the massacre off from the centre of his novel he is able to keep much of the ugliness of the debate out too. However, when in an interview Ghosh scorns at the Left government's keenness to help the Sahara Group set up a multimillion-dollar tourism resort in the same region -- the Sundarban -- one is sure that the author is politically more astute than his characters.

Ghosh has chosen his words so well and scripted his fiction with such elegance that the novel is bound to be a success. The novel will presumably be read widely by a subset who consciously or otherwise, define a class's morality as environmentalism. How well will they digest the work of fiction that alludes to their reality? And, did our author tone his work harsh enough to give his readers one bad night's sleep?