The threat over mad cow disease resurfaces yet again in Europe 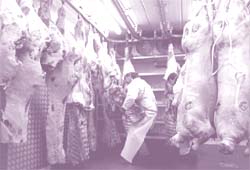 almost a decade after the first case of bovine spongiform encephalopathy ( bse ) or mad cow disease was detected in Britain in 1989, the French government was once again forced to ban meat and bone-meal in all animal feed as a precaution against the disease. The disease, which was linked to a fatal brain-wasting malaise in humans called Creutzfeldt-Jakob Disease ( cjd ) in 1996, has already resulted in 70 deaths in Britain and three in France.

The ban means France has to destroy 740,000 tonnes of meat and 275,000 tonnes of animal fat per year. Since this is above the capacity of its incinerators, the country has to find spare warehouse space quickly. The cost of destruction and stockpiling is estimated at around us $652.8 million a year.

As a way out, the French military has decided to open its warehouses to store meat and bone meal. "We can stock up to 180,000 tonnes in a few days notice," said Jean-Francois Bureau, defence ministry spokesperson. Environment minister Dominique Voynet said all sites would have to pass strict sanitary and environmental criteria.

Russia and Hungary have already imposed a ban on French meat amid growing fear that the disease is spreading, although no case of bse has been reported in either countries. In Switzerland, the Swiss Federal Commission has already called on its government to strengthen preventive measures and consider the possibility of a total ban, including use for farm animals. The panic is spreading to Germany, too.

It is agreed that the mechanisms by which the disease is spreading as well as it origins are still not well researched, let alone understood, although the very fact that a product of animal origin was given to herbivores has already raise some questions. In view of the sensitive nature of the problem involved as well as the sub-standard sanitary arrangements which exist in most European slaughterhouses and their chronic under-funding, no one country wants to upset the apple cart, especially in countries such as France, Italy and Spain.