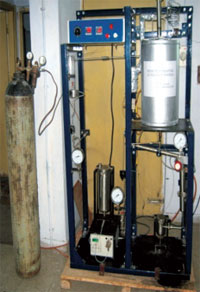 CARBON can be processed to make it porous and have a large surface area. This facilitates adsorption, that is, adhesion of a substance to a surface. The property is useful for removing pollutants from air and water. The processed carbon, called activated carbon, is used in water purifiers and sewage treatment plants. Since India does not have the technology to manufacture high quality activated carbon, it depends either on imports or foreign technologies.

They tweaked conditions while using standard techniques, steam activation and chemical activation. This to-be-patented technology, which involves optimisation of parameters, is one of a kind where indigenous coal has been used. “The work is of great importance as a purely Indian technology in adsorbance has succeeded in meeting international standards,” said S K Srivastava, scientist in charge of the Central Institute of Mining and Fuel Research in Dhanbad, Jharkhand.

Indian coal is considered unsuitable because of its high ash content, said Shripal Singh, the head of the research team. “But we were able to reduce the ash content from 35-40 per cent to 7-10 per cent through wet beneficiation, a process that involves washing coal to remove extraneous materials like heavy metals from coal,” Singh added.

Wet beneficiation, used in power plants to purify coal, was not used in making activated carbon earlier because of its high cost. Singh said the cost can be brought down with the help of lowash coal used in thermal power plants. The current price of medium quality activated carbon starts at Rs 250. Using indigenous coal, this can be reduced to Rs 150 per kg.

The new technology will ensure wider availability of activated carbon at low cost, making it more accessible to rural populations in need of purified water.

The team has also prepared the carbon from orange peel, waste tyres, and shells of almonds and walnuts.