A committee set up by the Bhubaneswar High Court has confirmed that mafias control the prawn trade in Orissa's Chilika lake. 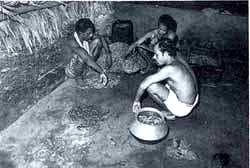 ALLEGATIONS of illegal practices in the prawn trade in Chilika -- Asia's largest brackish water lake -- have been confirmed by a five-member 'fact-finding' committee set up by the Bhubaneswar High Court.

The committee was set up in response to writ petitions filed by three primary fisherfolk cooperative societies challenging the government policy of leasing fishing zones in Chilika, which they said had led to "mafias taking control of the prawn trade", and resulted in marginalisation of the traditional fisherfolk.

According to committee head G S Das, "At the heart of the problem lies the state government's commitment to promote prawn culture in Chilika." The panel noted there was no attempt to demarcate within the lake zones for prawn culture and capture fishing and this allowed encroachment by organisations engaged in prawn culture.

The report notes tardy regulation has led to the bulk of the fishing, especially prawn cultivation, passing into the hands of 'absentee landlords', many of whom are "important politicians or their relatives, reputed bureaucrats, and moneyed people who apparently have a lobby in the government".

Nonetheless, the committee has suggested "a massive combing operation" to stop encroachment by prawn cultivators. With reference to the Tatas' controversial Rs 20 crore project, the Chilika Aquatic Farms Ltd, the committee reported that two state ministers have said that the company had not been given any lease for prawn cultivation on a commercial basis, but was allowed "advance possession" for a research project in aquaculture. Nonetheless, it notes that large-scale prawn culture should be discouraged "as it would damage the Chilika ecosystem".