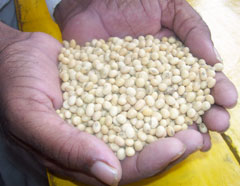 Fifteen seed companies have been banned from trading in any kind of seeds in Maharashtra on a permanent basis. This is a fallout of the investigation into last year’s large-scale soy seed germination failure in the state.  The order, issued on May 1, 2012, says that seven more companies are likely to face a similar ban. State agriculture commissioner Umakant Dangat informed Down To Earth that the ban has been imposed because the said companies failed to pay compensation to farmers despite orders from his department.

Following this, companies were ordered to pay compensation to farmers, but most of the major players failed to comply. Till date, only 5,792 farmers have been paid compensation to the tune of Rs 2.02 crore. Out of this sum, Rs 85.41 lakh was paid to 2,138 farmers by 50 private companies, while Mahabeej, Maharashtra state’s authorised seed production company, has paid Rs 1.17 lakh compensation to 3,498 farmers. Another 135 farmers were provided 118.90 quintals of fresh seeds in place of the defective seeds. But a huge majority of more than 25,000 farmers are still awaiting compensation.

Following this,  the agriculture commissionerate issued show cause notices to the guilty companies, who either failed to reply to the notice or could not provide satisfactory replies, says Dangat. He says that the ban on the said companies is permanent and irrevocable, and that their sales permits have been cancelled. They will not be allowed to trade in any kind of seeds in the state. The commissionerate has prepared a record of the names and photographs of the owners and managers of the said companies”, he added  “None of these individuals will be given permits to sell seeds in the state, even under a different company name, and if they try to obtain permits again action will be taken against them.”

The long-awaited order came after the issue was raised in the state Legislative Council by MLC Pasha Patel of the BJP on April 20, 2012. Patel and 12 other legislators accused the agriculture department of shielding guilty companies--till then only two companies had been declared guilty.  Agriculture minister Radhakrishna Vikhe Patil admitted that the department appeared to be trying to cover up the issue, following which the current order was issued.

Farmers' organisations have, however, rued the slow pace at which action on this mammoth seed failure is being taken. While complaints have been registered against 113 companies, 38 were let off without action and without considering farmers' testimonies, they said.  Out of the total of 193 seed samples which were found defective, court cases have been filed in connection with just 119 samples. No provisions have been made for paying compensation to the huge number of farmers. With the next kharif season a little more than a month away, this lackadaisical attitude is likely to hit farmers hard, say farmers' groups.