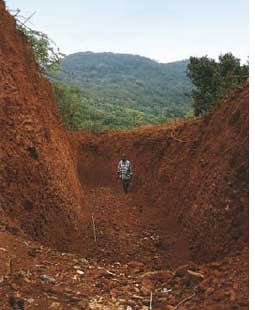 wild elephants that stray into territories that traditionally do not belong to them and affect people and crops may be in for a surprise. The Maharashtra government has, secretly, dug up trenches in two districts, Kolhapur and Sindhudurg, bordering Karnataka. Wildlife activists in Karnataka don't see reason in the move. Sources in Karnataka's forest department allege Maharashtra has dug trenches in Karnataka as well.

"I was shocked to see kilometres long trenches. Elephants do not understand political boundaries and need space to move around. If they are restricted within Karnataka, it will aggravate the existing human-elephant conflict in that state," says Shrihari Kugaji, a Belgaum-based activist.

Until 1990, wild elephants had a safe place in the Dandeli Wildlife Sanctuary in Karnataka but they started moving out after the construction of the Kali hydroelectric project, says Wildlife Trust of India's 2006 report. The report says: "It is important to look at the issue on a landscape scale, considering that the forested areas of Karnataka, Maharashtra and Goa are part of the larger Western Ghats ecosystem..."

The Maharashtra government is silent on the issue of trenches, but assures it is working on the problem. The state is launching a first-ever public private partnership on wildlife conservation with Earth Matters Foundation, Delhi. "Our proposal involves an elephant village near Tillari irrigation project in Sindhudurg, which will act as a care centre for captive elephants (rescued from cities) and buffer for wild elephants from Karnataka. They will be allowed to move freely there. We have 50 sq km of reserve forest available for the project and another two to three sq km of private forest needs to be acquired. Villagers will be involved in eco-tourism activities," Mike Pandey of the Delhi-based firm told Down To Earth. He added that the village will restrict elephants coming from Karnataka to venture deeper into Maharashtra.

Experts say such projects will not be able to address the growing problem of human-elephant conflict in Karnataka, Maharashtra and Goa. Maharashtra has been trying hard to ward off Karnataka's elephants but without much success. In 2004, it launched the 'Elephant Back To Home' project under which hundreds of forest department personnel assisted by armed police and home guards, aided by elephant catchers and domesticated elephants, attempted to send back a herd of wild elephants to Karnataka. But the project failed. In January 2005, a team of 18 forest department personnel was sent to track and contain the 'invaders', but they met with little success. In 2006, the state's forest department prepared a Rs 1.31 crore plan that consisted of creating elephant proof trenches; solar fences with electrification; employing watchmen; educating farmers to change crop pattern to chilly and tobacco; and increasing cash compensation. Activists claim the present digging of trenches may have been done as per the 2006 plan.

The issue has spurred a debate in Goa as well. "Elephants cannot follow a state permit system. If the elephants cannot enter Maharashtra, they will enter Goa. Certain villages in Goa are already affected by leopards straying into their fields and houses, now they will have to deal with elephants as well," says Nirmala Sawant, chairperson of the Mahadayi Bachao Abhiyan, an ngo in Goa. Forest officials in the state say they are not aware of the developments. Mahesh Kumar Shambu, deputy conservator of forests (north division), Goa, said: "Our state witnesses influx of elephants from Karnataka via Maharashtra. The topography of the land is such that till date elephants have not directly entered Goa from Karnataka," he said.