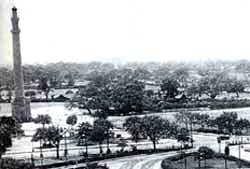 CALCUTTA maidan -- at 294-ha, the largest public ground in the teeming metropolis, is in danger of being developed as commercial property by the Indian army. The maidan belongs to the army's eastern command which has its headquarters in the adjoining Fort William estate.

The move, prompted by the army's resource crunch, has incensed Calcutta's millions, who have the support of the state's Left Front government.

Calcuttans have reason to be irate as the maidan supports most outdoor games in this sports crazy city. On holidays, thousands of youngsters from all over the city come with their kits to the maidan for a day of play and fun. "This is the only big public maidan in the city and if it goes, our teenagers will have no place to play," says Tapan Saha, assistant secretary of Paschim Banga Vigyan Manch, which is spearheading the efforts to mobilise opposition to the army's proposal.