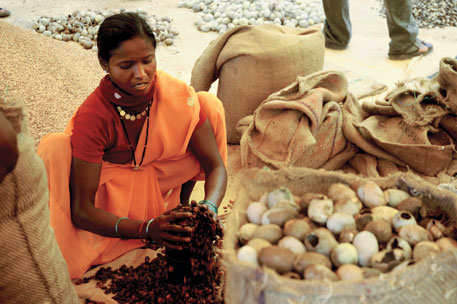 Recognising the role of forests in providing livelihood to people, UN’s Food and Agriculture Organization (FAO) has asked nations to formulate people-centric forest policies. “It is time for forestry to shift perspective from trees to people,” says FAO’s annual “The State of the World’s Forests” report released on June 23.

The report estimates that around 44.2 million people are employed in the forest sector.  People in the world are directly or indirectly dependent on forests for food, energy, shelter or livelihood.  As many as 840 million people (12 per cent of total population) collect wood fuel for their household use from forests. Wood energy is an important source of energy in lesser developed regions. Wood energy provides over half of all energy supply of 29 countries out of which 22 are in Africa. In Latin America and the Caribbean, this figure is 13 per cent and 5 per cent in Asia and Oceania. Forests also provide edible Non-Wood Forest Products (NWFP). About 10.9 kg of NWFP is the average per capita consumption  globally. These include fruits and herbs which are used for medicinal purposes in some areas.

Places where other building materials are expensive and unaffordable forest products come handy in providing shelter. One out every five people live in a house built mainly of wood. Across the world forest products contribute to the households of almost 1.3 billion people (roughly 18 per cent of the total population).

Despite the huge benefits the forest provide to the local people, the needs and concerns of the people have not been catered to in the forest policies of most of the countries, points out the report.  An analysis of 121 countries’ policies by the FAO shows that most countries provide a “dominant technical paradigm” for forest management rather than a “people oriented one”. Since 2007, only 26 countries have formulated policies to reform the land tenures in the forests to support local livelihoods in a better way.

The report suggests new policies should be undertaken and poverty and rural employment should be the ulterior driving force in amending the old forest policies. Providing affordable and reliable access to finance for local and indigenous communities should also be a priority. The report highlights that the countries in Latin America and Caribbean region have done a good job and taken measures to increase local people’s access to forest resources and market.

The report also recognises the importance of Traditional Forest Related Knowledge (TFRK). These traditional knowledge and practices benefit local communities and beyond and should be encouraged, it says.

The final key messages of the report states that in order to measure completely the socio economic benefits from forest data collection should focus on people’s livelihoods and forests. Thus, the government policies should be primarily focused on people who are benefiting from the forests (food, energy, shelter) rather than the formal forest sector. “We should stimulate new ideas on the multiple relationships between people and forests and how can we work together on their (forests) advancement in order to promote food security and sustainable development should be understood,” suggests Jose Graziano da Silva, FAO director general