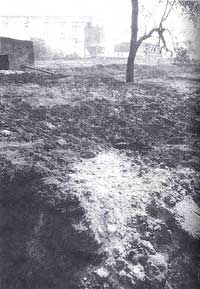 PORTLAND cement may acquire a new, environmentally friendly, chemical composition. Researchers are focussing on how to reduce emissions from cement manufacture and also use less energy. Another area of research that has emerged recently examines the use of bauxite (aluminiuni oxide) and wastes such as fly ash, scrap iron and blast furnace slag in cement manufacture.

Large amounts of carbon dioxide and nitrous oxides are produced in manufacture of cement. Della M Roy of the Materials Research Laboratory of Pennsylvania State University estimates 30 per cent of limestone used in cement production becomes carbon dioxide. Emissions can be reduced by lowering temperatures at which different cement varieties are manufactured, but this requires altering the composition of cement.

Belite cement, for example, uses gypsum and bauxite to replace 10 per cent of the. limestone. This has reduced energy use by 16 per cent and carbon dioxide emissions by 10 per cent. But a disadvantage is that it takes longer to set than Portland cement. This can be solved by adding superplasticizers that reduce the quantity of water needed to mix belite.cement into concrete.

Alinite cement, developed in the former Soviet Union in 1977, also contains less limestone and uses calcium chloride, which makes constituents react at a lower temperature. Its drawback is that the chlorine from calcium chloride corrodes steel and other metals used in reinforced concrete. 16 use is, therefore, limited to unreinforced concrete or foundations.
Emissions as a percentage of cement production fall when production rises. However, this has its limitations After a point, says Hiroshi Uchikawa, R&D director of Onoda Cement Co Ltd, one of japan's leading cement manufacturers. Significant emission reductions can come only from changing the manufacturing process, mainly in two areas. One is the type of reactor us e*d and the other, the type of grinding technique.

Portland cement is manufactured in a rotary kiln. If the kiln is replaced by a fluidised - bed reactor, energy use would be cut by more than one-third and construction costs by one-fourth in a plant producing 330 tonnes of cement per day. Although fluidised bed reactors are not new, they have been adapted by the cement industry only recently.

Whether produced in a rotary kiln or a flu- Ulm idised bed reactor, cement has Ito be ground to a fine powder. Grinding can be improved if the conventional ball mill is complemented with a roller mill as the latter has a greater contact area on the grinding surface than a ball mill. Therefore, smaller ball-and-roller mills that use less electricity can be used.

The disposal of fly ash is a major problem in India. Industries and power plants in the country produce 40 million tonnes of this fine powder every year. While some companies use fly ash as landfill material, disposal remains a vexatious process. Fly ash does not require to be ground and can be used instead of clay in the manufacture of cement. Fly ash ran also be used in concrete - a mixture of cement, stones, sand and water. Says Roy, "Fly ash can replace up to 50 per cent of the cement in concrete without any noticeable fall in strength. Such a mixture does, however, take longer to set than concrete without fly ash."

Blast furnace slag is used to manufacture another type of cement called belite-sulphoaluminate cement. "This type of cement does not save energy but has desirable characteristics such as no shrinkage on drying, no efflorescence and a short setting time. It is used for glass fibre, reinforced concrete and precast concrete in Japaii," says Uchikawa.