There are already instances of an increase in heat-related mortality and decrease in cold-related mortality in some regions. Also, local changes in temperature and rainfall have altered the distribution of some water-borne illnesses and disease vectors in many areas. Overall, segments of population that are more vulnerable to climate change at present would become more so in the future. For example, it is expected that health losses due to climate change like induced under-nutrition will occur mainly in areas that are already food-insecure.

Under-nutrition, a major threat
If climate change continues as projected, people would be at a greater risk of injury, disease and death due to more intense heat waves and fires, increased risks of food and water-borne diseases and vector-borne diseases. Under-nutrition from lower food production in poor regions would also contribute to the risk. It is predicted that by 2100, some parts of the world would experience 4-7 °C higher temperatures. This raises concerns about habitability of some areas.

Mitigation measures
The report accepts that there are gaps in the understanding of the health consequences of climate change. Thought the report also accepts that there are gaps in our understanding of the health implications of adaptation measures, it recommends some actions that could improve health in the future. Simple public health measures such as provision of clean water and sanitation and basic health care such as vaccination. Other measure include reduction of emissions of air pollutants from energy systems, a shift to cleaner energy sources, a transport system that reduces use of motorised vehicles, improving air quality and promoting physical activity. The report also advises a shift away from consumption of animal products, especially from ruminant sources. 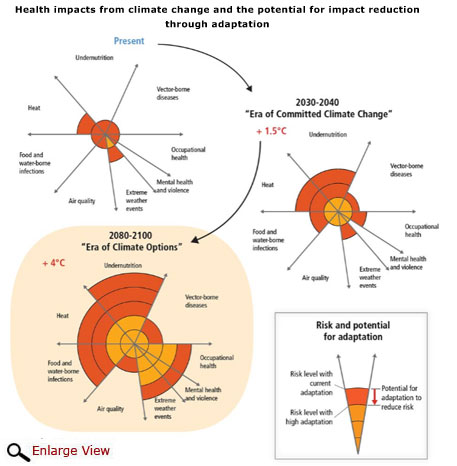 The effects of weather and climate change on Dengue