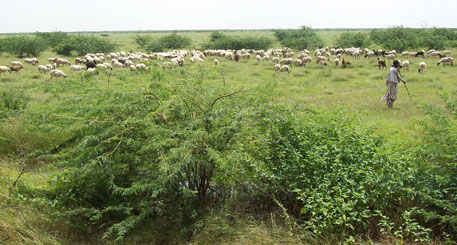 The Maldharis, a pastoral community, have been living in the Banni grasslands of Kutch for centuries and have enjoyed customary grazing rights over the land. Of late, their arcadian peace has been shattered  by the Gujarat forest department's forest working plan for the area. The plan makes the grasslands off limits for grazing livestock—the main source of living for the Maldharis. The department recently deputed a divisional forest officer and three range officers to the Banni division to implement the forest working plan.

Pushed to a corner, 15 of the 19 village panchayats in the region sent notices to the state government in the first week of February, demanding their right to manage the grasslands under the Forest Rights Act (FRA) of 2006.  The community has asked the government to withdraw the Banni working plan and has threatened legal action if the government fails to respond to the demand.

FRA recognises the traditional rights of the forest dwelling communities over forest resources. It says the scheduled tribes and other forest dwellers who have been dependent on forest resources for their livelihood for 75 years or more up to 2006, have the right to use, protect and manage such forest resources.  The Maldharis are not scheduled tribes but they have been living in the Banni grasslands, the second largest grasslands in Asia, for centuries. The erstwhile ruler of Kutch, Maharav Khengarji, had given the land to the Maldharis in the 19th  century for grazing.

As of now, around 25,000 Maldharis live in 48 villages inside the Banni. The grasslands are spread over 2,400 sq km between mainland Kutch and the Greater Rann of Kutch. The area was declared a protected forest in 1955. However, villages continued to function under the revenue gram panchayats. No survey was carried out to settle the rights of the villagers as the forest and the revenue departments kept passing the buck to each other.

The state forest department prepared the working plan for the management of Banni grasslands in 2009. It justified the action by saying the villages were within protected forest and hence their rights would be altered. The working plan disallows open grazing on the grassland. Around 600 sq km of the grassland is already off limits as it is a part of the Kutch desert sanctuary and the Chhari Dhandh Conservation Reserve. In the remaining grasslands, the forest department proposes to protect 30 percent land as grass plots, 38 per cent will be used for harvesting Prosopis juliflora commonly called Vilayati keekar by the forest development corporation and 30 per cent will be utilised for plantation and regeneration of forests.  The plots will be fenced off for five years on by rotation. The Union Ministry of Environment and Forests (MoEF) approved the working plan in 2010 and now the forest department is in the process of implementing it. 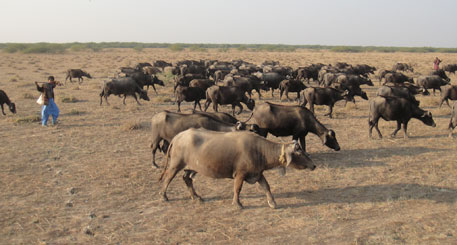 A fortnight ago, the villagers refused to sign the MoU allowing fencing of the grass plots because the forest department was not ready to promise in the MoU that it will open the plots after five years,” says Sabyasachi Das, chief executive officer of Sahjeevan, a Kutch-based non-profit working for the rights of Maldharis.

The Maldharis fear the working plan, if implemented, will jeopardise the livelihood of the community. There are about 100,000 cattleheads  in the region which graze in the Banni. The Kankrej cow and the Banni buffalo, a breed raised by the Maldharis, are known for their good milk yields. Kankrej bullocks are used for agriculture in the Saurashtra region of the state. According to an estimate by Sahjeevan, the grasslands produce 110,000 litres of milk every day. The livestock economy— sale of milk, milk products, live bullocks and buffaloes— contribute Rs 100 crore per annum to the region, estimates Sahjeevan. “There are around 60,000 Banni buffaloes in the region. They are night grazers and need 8-15 kilometres of free grazing. If the forest department closes the grasslands in the name of the working plan, where will our animals graze?” asks Ramzan Halepatra, a community leader.

The Maldharis, hence, have demanded that the current working plan be shelved and the village gram sabhas allowed to prepare a new working plan for the region, for which the government should provide technical assistance.

The Gujarat government has not started implementing FRA in the region.  The requisite committees at the village, sub-division and division level for processing titles over forestland under FRA have not been constituted yet. “When we asked the authorities to start the process of implementing FRA in our region, they said their priority was tribal districts of the state. Since Kutch is not a tribal district, they will think about it later,” says Salim Naode, another community leader.
The Maldharis have demanded that the activities of the forest department in the Banni should be stopped till the recognition of the community rights is settled under FRA. The notices say if the government does not respond to the demands in 60 days, the residents will take legal action as provided in the Act. The villages are collecting Rs 10 per livestock the Maldharis possess to fund a legal battle if need arises.

S K Nanda, additional chief secretary (forest and environment) of Gujarat says the maldharis were being irrational. “The Banni grassland, which was famous for its nutrient-rich grasses, has decayed over the past few decades because of lack of protection. The government’s first priority is to restore the grasslands and this working plan is necessary for that. We have no problem in implementing FRA in the region. I have been personally pushing the district administration to implement FRA. Once the Act is implemented, we are open to make necessary changes in the working plan,” he says.  He, however, adds that the management of the grasslands cannot be handed over to the people. “It is a government-owned property,” he added.

The Maldharis, it would seem, have to prepare for a long haul to win their rights.