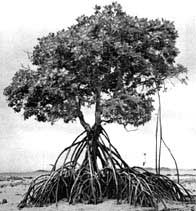 THE West Bengal government has been chided by the Union ministry of environment and forests (MEF) for cutting down mangroves over an area of 1,750 ha in the Sunderbans region without procuring prior approval of the Centre. The MEF has also rejected a plea by the state for granting the latter permission to clear mangroves in an additional 630 ha of the world famous biosphere reserve.

West Bengal had sought permission to fell trees in the Dhulibhasani area under Ramganga range of the South 24-Parganas district, after the recent Supreme Court order stipulated that no natural forest should be cut down without an approved working plan from the Centre.

The state government explained that it went on with the initial cutting of trees on the ground that locals who were dependent on forest produce, faced immense hardships an account of the supply being abruptly discontinued.