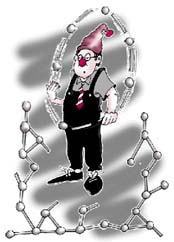 whether it is designing a new drug or synthesising an industrial chemical, chemists are mostly trying out a hit and trial method of adding an atom here and removing it from there. This process is, obviously, very tedious as well as uncertain. After all, manipulating atoms precisely in a substance is an extremely challenging task. But now, a group of scientists in Germany has succeeded in demonstrating a novel way of doing this. Though scientists have been using lasers to selectively manipulate atoms before, the present work is the most precise yet.

A way of selectively breaking chemical bonds (the interaction which binds one atom to another) would be very useful for chemists. To synthesise a novel drug chemical, a chemist might want to start with a well-known chemical and then add atoms at specific sites or remove them from some other sites. Ordinarily, the process of bond breaking is indiscriminate and hence the chemist has to first use some other protective groups to protect the sites that need to remain unchanged. These extra groups need to be then removed to get the required result. But this method is time consuming and expensive.

Scientists have been using laser light to break chemical bonds for some time now. Shining laser light of exactly the frequency at which the bond breaks can lead to the atom absorbing the laser energy and becoming free of the molecule. But this approach, which seems straightforward, suffers from the flaw that though the molecule absorbs the right amount of energy, it dissipates too quickly to break the bond.

D Menzel and his colleagues at the Technical University of Munich, Germany, have adopted a very different approach. Chemical bonds typically result from the sharing of electrons between the different atoms. The scientists realised that they could break bonds by sucking the electrons out of them. Atoms consist of a positively charged nucleus that has electrons revolving around it. The electrons move around the nucleus in orbits, much like the planets move around the sun. The electrons have energies depending upon which orbit or shell they are occupying.

The ones close to the nucleus are more tightly bound than the ones further away. Chemical bonds are typically formed by the electrons in the outer-most shell. If an electron is given energy, it will move to a higher orbit and if the energy is sufficiently large, it may even escape from the atom, leaving behind a positively charged ion. The trick consists of removing an electron in the inner shells since this leads to the outer electrons dropping into the inner shells and thus breaking the bonds between the atoms.

This kind of selective bond breaking has been done in gases before, but the German group did it with nitrogen atoms bound to a nickel surface. They used x -rays to burn holes in the inner core of the atoms. The x -rays are far more energetic then visible light and thus lead to a rearranging of the inner electrons.

By choosing the x -rays that are precisely of the correct energy, the researchers were able to dislodge electrons from the precise atom that they wanted. They used a precisely tunable x-ray beam from the Hasylab synchrotron in Hamburg. A synchrotron is a particle accelerator that also serves as a precisely tunable x -ray source. With this, they were able to break specific bonds in the nitrogen molecule. They were also able to show that depending on the energy of the x -rays, either the bond between the two nitrogen atoms or the bond which binds the nitrogen to nickel can be broken.

Using a synchrotron source to break chemical binds is undoubtedly an expensive way to do molecular surgery. Nevertheless, the work is important because it shows an entirely new way of breaking chemical bonds selectively which could in the future lead to an inexpensive and easy to use method for cleaving atoms from molecules precisely (Physical Review Letters , Vol 84, p374).