Each year, the Mansagar lake in Jaipur would swell and spread during the monsoon. In the lean season, the lake water would recede from the margins. The reclaimed land would be brought under cultivation, mostly to grow vegetables, while children would find dry patches to play cricket. But for the past four years, children living in encroached areas south of the lakefront have been unable to find a dry patch to pitch their wickets. Reason: the lake has turned into a perennial water body.

The lake bed was dredged to enhance its holding capacity. The authorities implemented a scheme to discharge treated sewage in the lake to ensure the water balance was maintained in spite of high evaporation losses. This prevented the lake’s decline from a maximum spread of 139 hectares (ha) during the monsoon to 49 ha in the pre-monsoon lean period. The transformation took place after the initiation of a project in 2006, under which the lakefront was leased out to a hospitality group and the lake’s health was tied to revenues from tourism.

The water quality of the lake has also improved over the past five years as the revenues earned were used to prevent pollution. The newly acquired status, however, came under threat in May this year when the Rajasthan High Court deemed the leasing of the lakefront “null and void”. The court said leasing out of the property was against the public trust doctrine—the government must maintain certain resources preserved for public use. According to the developer, the public trust doctrine cannot be applied in this case since it is applicable only to natural resources, not artificial tanks. But this didn’t find favour with the courts. The battleground has now shifted to the Supreme Court where the developer and the state government have filed separate special leave petitions. Both petitions have been clubbed together for hearing.

Mansagar, once a natural shallow water body situated in the northern fringe of Jaipur, became a larger point of water collection in the 18th century after a dam was built between Amber hills and Amagarh hills. The water quality in the lake began to deteriorate in the 1960s when city authorities diverted most of the city’s sewage into the lake through two drains. As Jaipur grew into a tourist destination in the 1970s, the lake suffered further, turning into a receptacle of the city’s filth and sewage. Attempts in the past three decades failed to control pollution and protect the Jal Mahal, a monument within the lake, since maintenance was never taken up as a public spending priority. 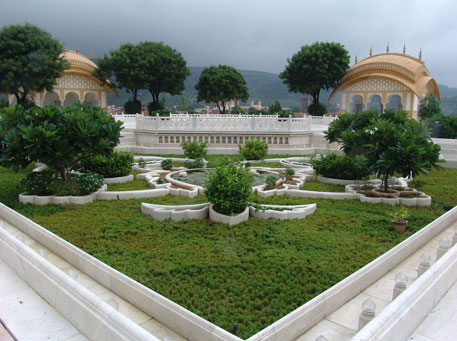 In 2002, the Union Ministry of Environment and Forests (MoEF) appointed the Jaipur Development Authority (JDA) as the nodal agency for Mansagar's restoration under the National Lake Conservation Plan, and sanctioned  Rs 24.72 crore. It gave JDA Rs 17.3 crore and asked the state government to raise the remaining amount. The sewage treatment plant was upgraded; a two-km tourist trail and a one km-long promenade were built, among other things. But the funds were insufficient to maintain the sewage treatment facility or any of the other civil works.

The state government then conceived a tourism project to lease out 40 ha of the Mansagar lakefront, providing an opportunity to develop a stipulated five ha built up area for entertainment and hospitality.  A tender was floated in 2004, and four consortia bid for the project. Jal Mahal private limited, led by Kothari builders, bagged the contract. The following year, a 99-year lease was signed with the state government, at an agreed Rs 2.52 crore annual lease amount, with a built in 10 per cent increase every three years. The objective behind private sector participation was to ensure funds to operate and maintain the pollution abatement infrastructure.

MoEF officials, it is learnt, have been quite appreciative of the sustainability model, and had recommended that a similar structure be considered for other lakes in a paper presented at the 12th World Lake Conference in 2007 in Jaipur.

The project, however, ran into trouble in the seventh year of the lease period. Two public interest petitions were filed in the Rajasthan High Court in 2010 and 2011, seeking to scrap the tourism project and cancel the lease agreement. According to the petitioners, a 99 year lease amounted to sale and the commercial value of 40 ha would not be less than Rs 3,500 crore. The developer dismisses these claims. “If it was such a steal, why didn't more developers come forward and bid for the project. Even the first time round there were no bidders, since most felt the time frame did not make for significant returns. The fact is that the lake was a sewage dump back then,” says Rajeev Lunkad, the project director at the time. 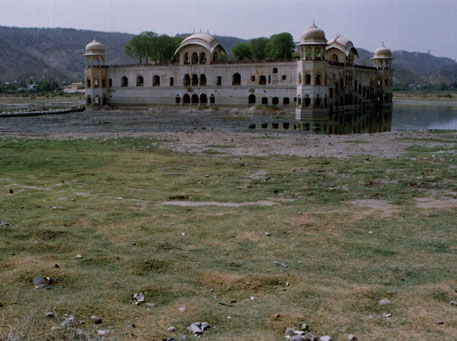 According to the developer, as far as the question of undervaluation is concerned, the court must consider the 2002 prices, not today’s valuation. Secondly, the floor space index according to them has not been taken into account; this was not commercial freely available land, but had inbuilt restrictions on usage, height, and covered space. For instance, a four storey building, built in a quarter of a plot has a floor space index (FSI) of 1. The Jal Mahal project has a floor space index of 0.13, less than the 0.2 FSI set for ecologically sensitive projects. “Given this, the valuation was not more than Rs 100 crore,” says Lunkad. At the time the high court gave its final verdict, the works funded by MoEF had been completed and the developer says he had spent Rs 80 crore, which includes money spent on restoring Jal Mahal.

How the lake was revived

Mansagar lake was turned into a perennial water body despite less than average rainfall recorded in previous years. This was achieved by dredging the lake to a depth of 3-3.5 metres in 2008 to increase its water holding capacity and diverting treated sewage into it to maintain the water balance after taking into account evaporation and percolation.

The water quality improved, too. In July 2005 and 2006, when MoEF tested the water for its quality, its biological oxygen demand (BOD)—an indicator of organic pollution—was in the range of 115 to 210 mg/l, which was several times higher than the bathing quality standard of 3mg/l. Today, the two nullahs carrying untreated sewage have been intercepted and diverted to carry the dry weather flow or partially treated sewage downstream where it is used for irrigation. Only storm water is allowed to enter the lake now. 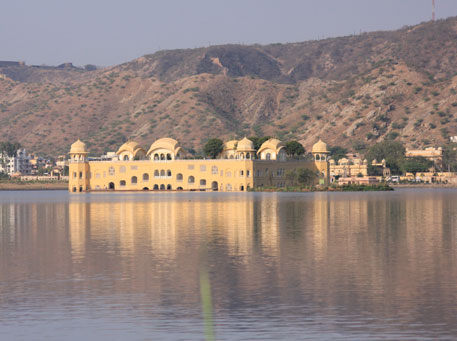 But then storm water drains inevitably carry sewage from unsewered colonies. The developer monitored the first flush after a storm and found it having higher BOD when compared with untreated sewage. “The first couple of years there was a plume of black entering the lake when the rains arrrived, since the first flush would carry all the settled muck in the drains, including solid waste,” says Lunkad. After consultations with experts and the government, the developer decided to take five per cent of the lake area and covert it into an in-situ settling basin, where solid waste would be collected, and a sedimentation tank to reduce the suspended solids and pollution load. The overflow from the sedimentation tank would enter the lake. The water quality improved visibly and has been recorded with a BOD of less than 30 mg/l, the stipulated discharge norm set by the Central Pollution Control Board.

“Whenever I passed this place, even as a student, I felt angry for this careless handling of Rajasthan’s treasures. And I am sure every foreign tourist felt that way” says Harald Kraft, international consultant who designed the in-situ natural treatment system. Kraft adds: “I use this project as a special example of private public partnership, and technically ambitious lake restoration project and as an example of what can happen even in a state like India, if people are dedicated. I have shown it in presentations and lectures in China and around the world. If this ridiculous third world ruling is executed and the lake is put back in his stage as cesspool, it will be fine example of what greed and corruption can still do in India”.

Notwithstanding the restoration work undertaken, on May 17, the Rajasthan High Court, while disposing of the petitions, ordered the developers to incur all costs to restore the lakefront to its original condition, remove the in-situ sedimentation basin and settling tanks built, and examine restoring the two nullahs to their original positions. The developer filed a special leave petition stating that “while holding that the lease and the licence were illegal, the high court disregarded the very purpose of sustainable ecological preservation and development and directed the immediate removal of sedimentation facilities essential for maintaining the quality of water”. The petition further stated: “These directions, if implemented, will inevitably lead to a huge amount of pollutants contaminating the water body”. 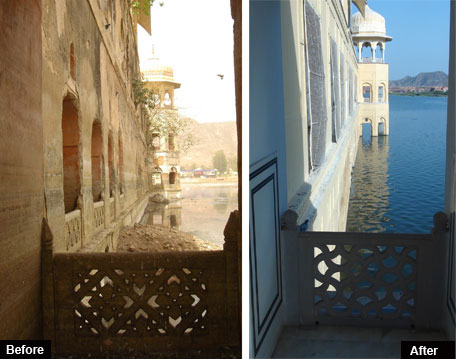 A major contention of those opposing the tourism project relates to the spread of the lake. According to project proponent, the spread of the lake has increased over time. The developer’s argument is that a few decades back Jaipur didn't have a piped water network and the dry weather flow or sewage did not flow into the lake through the year. Today, the dry weather flow can top up the lake in six months.

In the detailed project report (DPR), three hydrological models were considered with the spread of the lake ranging from 113 to 161 ha. The DPR chose a contour level with water level just below the ground floor of the Jal Mahal; this would protect the floor of the monument, give stability to the structure which would yet remain submerged, and therefore aesthetically pleasing. This established the spread at 113 ha. This incidentally is the spread of the lake mentioned in the revenue records also, says the developer.

“The court has assumed this extreme figure to represent the fact that the lake has been encroached upon. In reality more space has been given to the lake spread, at 125 ha, as per the DPR. Some records show that the Jal Mahal was not even in the lake,” argues the developer. But the high court found that “the state and its authorities have acted in an illegal and arbitrary manner and in utter disregard of public trust doctrine.” “The transaction in question is against public interest and public largesses have been frittered away to a private sector developer,” read the judgement.

Lunkad has a differing viewpoint. “We need to create a buffer between nature and development, and tourism is the way ahead. Question is how we must interpret public trust. One option is to allow this interaction to happen or else depend on subsidised funding and accept the mediocrity that comes with it,” he says. The developer says such activity needs a cash cow, and in this case it is 40 hectare, of which 5 ha will be used for development of resorts, hotels and food courts.

Officials concerned with the case have responded only through the courts as the matter is currently sub judice. Lake conservation in India is at a crossroads, and there is little doubt that the final verdict of the apex court is going to be a landmark judgement. The apex court has sought responses from the original petitioners and other involved parties.