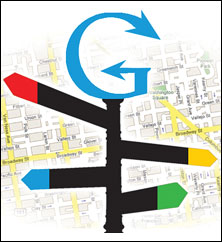 Apedestrian injured by a motorist in the Californian city of Northbridge has filed a lawsuit claiming Google Inc supplied unsafe dir ections.

Lauren Rosenberg filed the suit on May 28 seeking more than US $100,000 in the District Court in Utah.

Rosenberg used her phone in January to download directions from one end of the Northbridge to another. Google Maps led her to a four-lane boulevard without sidewalks that was “not reasonably safe for pedestrians”.

The case has become a sensation on tech blogs, websites and cable television channels, with critics assailing the woman for ignoring her own safety to blindly follow online directions. Her lawyer, Allen Young, said the truth was different.

“Google had some responsibility to direct people correctly or warn them. She relied on Google’s walking instructions and thought she should cross the street.” Rosenberg is seeking compensation for medical bills, plus more for lost wages and punitive damages.

Google spokesperson Elaine Filadelfo said the company had not received a copy of the lawsuit and could not discuss it.