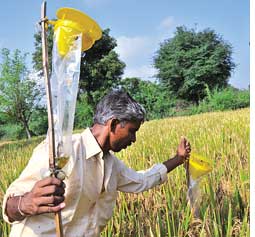 ANDHRA PRADESH'S soon-to-be-finalized policy on organic farming has set off fears that rather than bringing down the cost of cultivation and making organic crops available at local level, it may end up making farmers market-dependent.

Farmers' groups, agriculture universities, certifying agencies and agri-firms got to know the policy at a stakeholders' meeting on November 21, where Agriculture Commissioner Poonam Malkondaiah presented the draft details.

"The approach they have taken to draft the policy is to create market links instead of making it a livelihood issue," said G V Ramanjaneyulu, the executive director of the ngo Centre for Sustainable Agriculture, which has been promoting organic farming in the state for years. Apart from promoting the use of organic matter like crop residues and green manure, the policy also mentions promotion of bio-fertilizers supplied by industry. Efforts are on to incorporate a clause in the policy for government support on the lines of subsidy given on fertilizers, said Swarna Vijaya, assistant director (organic farming) in the state agriculture department. "We will train the villagers to make bio-formulations but they will also be available in the market," she added.

The policy mentions organic cotton, mango, orange, cashew, chilli, turmeric, coconut, aromatic plants, rice, pulses and vegetables as crops available for export. "This is to boost export potentiality of the state and it will encourage a shift away from crops that meet local requirements," said Jayaram Killi, consultant with the Society for Elimination of Rural Poverty (serp) of the rural development ministry.

The policy proposed an Andhra Pradesh Organic Development Programme. This will be an intermediary between the farmers and the government, provide a single-window access to market, industry and other stakeholders and coordinate between national and international organic farming organizations.

Farmers will have to get their fields certified to get their products meet international standards. "Organic certification of farms will make the process costly for the farmers but very remunerative for the certifying agencies," said Ramanjaneyulu.

The policy, to be finalized by December end, has some redeeming aspects as well. It envisages a key role for agriculture universities, research stations and veterinary universities to promote and document the progress in organic farming. It plans to include organic farming in the school curriculum.