Surgeries that are planned in advance, may soon be performed without the need for blood transfusions 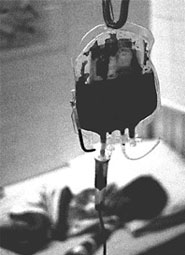 the scarcity of blood throughout the world has prompted researchers to devise methods so that its use could be minimised. A team of researchers led by Lawrence Goodnough at the Washington University School of Medicine, St Louis, usa , reports that new drugs and techniques can make many transfusions unnecessary. They have developed erythropoiten therapy that eliminates the need of blood transfusion during surgeries. The method also reduces the risk of infections and other risks associated with blood transfusions ( New England Journal of Medicine , Vol 336, No 13).

Erythropoiten is a human hormone that boosts the production of red blood cells in the body. A patient who is required to undergo an elective surgery, is given six shots of erythropoiten few weeks before the surgery. During this period, he generates about one litre (two pints) of blood. Even after losing nearly two to three pints of blood during the surgery, the patient's body contains enough red cells, thus ruling out the need for transfusion of blood.

Goodnough and his team performed the erythropoiten therapy on some patients and conducted surgeries without external infusion of blood. After the surgery, the patients felt better and had higher red cell counts than those who received blood transfusions. Inspired by the success, the researchers conducted clinical trials for erythropoiten on other patients reporting for prostrate surgery. Out of 24 patients on whom the tests were conducted, only one required a pint of additional blood. All other patients were found to have high red cells counts after the surgery.

The therapy is prescribed to mildly anaemic patients who need to undergo a major surgery. Anaemic patients contain a reduced number of red blood cells. Most of these patients require blood transfusions. They need the medication at least two weeks before the operation. The only limitation of the therapy is that the procedure is only applicable to elective surgeries, which can be planned in advance. It cannot be performed on patients who have to undergo emergency operations.

The researchers are now making attempts to improve the procedure. For instance, the erythropoiten therapy is expensive and costs nearly three times the money needed for blood transfusions. T G Monk, a colleague of Goodnough, is conducting clinical trials with lower doses of the medication as well as attempting to combine it with other methods. He has already succeeded in bringing down the required quantity of medicine to half.

Some other research groups are testing different methods of 'blood-less surgery' that include testing blood substitutes. Blood substitutes carry oxygen just like red blood cells. These substitutes are made-up of either entirely synthetic or haemoglobin molecules from cows or humans. Such chemicals have been found safe when injected into the blood before surgery. Clinical trials have also shown that they can prevent blood transfusions in a variety of surgeries including heart surgeries.

Methods such as the erythropoiten therapy or injecting blood substitutes work best when they are combined with a technique called acute normovolemic haemodilution. In this procedure, doctors remove nearly four pints of blood -- bolstered with either erythropoitein or blood substitutes -- before a surgery. With four pints of saline solution, the patients bleed a watered-down solution during the surgery and then receive a transfusion of their own enriched blood. Donating four pints of blood just before a surgery is much cheaper than the standard practice of donating it four weeks in advance and storing in blood banks. As the blood is not taken outside the operating theatre, it has a very little chance of contamination.