Development of a low-cost kiln for baking pottery in rural areas comes as a boon to those dependent on this ancient craft for a living. At the same time, it reduces pollution considerably 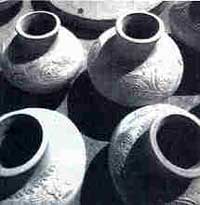 ONCE Upon a time, potters eked out a comfortable living by producing earthen wares. Today, not too many people use their products and their market has shrunk considerably. Besides, they have to buy firewood at exorbitant rates, while, earlier they collected the same from nearby forests. These two factors have made them the most economically backward community in the country.

Traditional kilns in Orissa use 1.2 kg of firewood for sintering (blending a mixture into a solid mass by heating) each kg of thin-section pottery like earthen pots and two to three kg for making roof tiles. Sintering is conducted at a low temperature of 600'C. Hence, the products are poor in strength and have a short life. Also, temperature gradient in traditional kilns is not uniform with the result that 10 to 20 per cent of pots are rejected after every firing. due to under-or over-heating or breakage. Traditional kilns also release a lot of smoke, thus polluting the environment. After firing, they are tom down and reconstructed to enable unloading- of the sintered pottery and loading of unbaked pottery, thus increasing labour costs.

In -an effort to counter these problems, the Bhubaneshwar-based Regional Research Laboratory has developed a low cost pottery kiln named 'Queen'. The 'Queen' kiln is bottle-shaped with the chimney at the place of the mouth. It uses low-grade raw coal to bake products like domestic earthen ware, handicrafts, roof tiles, floor tiles, etc.

The 'Queen', a permanent structure made of red bricks, clay and sand, has been in operation in Orissa and West Bengal for the past two years. The pottery is loaded and unloaded through a door, cutting down drastically on labour. The On design ensures an uniform high temperature of 800-900'c during baking, which reduces loss due to breakage and also increases the life and strength of the products. Firing time is also reduced in the 'Queen', which takes a total of seven to 12 hours depending on the moisture content of the pottery, while traditional biomass kilns take up to 48 hours. For firing Y one kg of pottery, 125- 175 gm of F-grade coal is utilised thus saving 60 per cent energy. The pollution caused by the kiln is minimal as the coal is totally burnt. By switching over from kilns to traditional 'Queen' kiln, the overall cost of production goes down by 50 per cent.

Depending upon the size, the construction costs of these kilns range from Rs 6,000 to Rs 18,000 in rural areas. The average life of the kilns is five to 10 years depending on the maintenance.