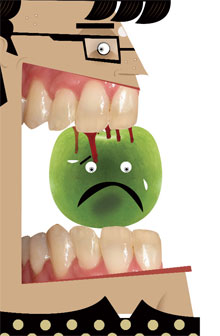 VEGETABLES and fruits are still alive when you eat them raw, so say USÃ”Ã‡Ãªresearchers. They are just like flowers who continue to be alive, at least for a while, even after you pluck them and place them in water in a vase, says Janet Braam, lead researcher and professor of biochemistry and cell biology at Rice University, US. This is because plants are built in parts and these parts, such as vegetables and fruits, can be relatively independent of the rest of the plant, Braam explains. Cells in their tissues, therefore, do not immediately die even after being cut.

The scientists also found that fruits and vegetables continue to have circadian rhythm, or internal clock, post-harvest and hence they can perceive and respond to light. “We found that even after harvest, some fruits and vegetables can respond to light or dark cycles and show rhythmic behaviour, such as defense against insects and accumulation of specific chemical compounds in cabbage,” says Janet.

Braam and her colleagues initially carried out their research on cabbage. The team exposed one set of cabbage to light for 12 hours and to darkness for the rest of the day for three days, and then measured the levels of anti-pesticide and anti-cancer compounds, glucosinolate for instance, they produced. Then they exposed the batch of cabbage to looper moth caterpillars that were also exposed to a similar pattern of light and darkness.

The scientists observed that the cabbage suffered less damage when exposed to the caterpillars that were in the same time phase as them. In comparison, cabbage that were exposed to constant light or constant darkness were 20 times more damaged. The out-of-sync cabbages were not able to defend against the caterpillars as they were preparing themselves at the wrong time of the day, notes the study published online in Current Biology on June 20.

The researchers further tested their hypothesis using other vegetables and fruits, such as lettuce, zucchini, sweet potatoes, carrots and blueberries. They observed a similar response in all.

“Here we demonstrate that the circadian clock of harvested cabbage (Brassica oleracea) is entrainable (synchronised) by light-dark cycles. This results in enhanced herbivore resistance,” the researchers note in the study.

Braam says in future, the work may lead to practical advice about at what time of the day one should eat fruits and vegetables to get the highest nutritional value.

Suresh Kumar, senior scientist at the National Institute of Abiotic Stress Management in Pune says, circadian rhythm of plant which plays a major role in growth and development of plant is well established. But continuity of such circadian entrainment even after harvest of produces and its importance on storage life of fruits and vegetables have been unclear. “Some aspects of this research can be implemented in stressed plants that can be used as bio-factories for synthesis of antioxidants and other health promoting compounds,” says Kumar.

The discovery can also change the way we store food and open another Pandora’s box of research on fruits and vegetables.