Celebrations of the new century might be accompanied by multiple nuclear meltdowns wrought by the millennium bug. Is there a way out? 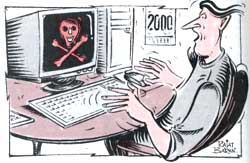 EVEN as we count off the days to the next century, scientists and computer professionals are hard at work, wracking their brains to come up with a solution to the millennium bug, a problem that promises to acquire fearful proportions in the next few years. What exactly is this bug? The Year 2000 or Y2K, problem arises from the widespread use of two-digit date fields, which leaves computers confused whether "00" refers to the year 1900 or 2000. According to detailed estimates, failing to fix this pervasive "bug" can cost companies and governments around the world hundreds and billions of dollars.

And that, say experts, is only the tip of the iceberg that can sink the technofetishists' dreamboat. Recent reports say that unless this problem is "debugged", we can even expect meltdowns at many of the world's nuclear power plants. Serious accidents could occur in these plants as the computers fail to recognise the year 2000, leading to disrupted power supplies, disabled safety systems or even radiation leaks, warn British nuclear regulators.

The UK Health and Safety Executive (HSE) says the bug has been found in at least four of the alarm and monitoring systems at British nuclear plants and it might exist in many other nuclear plants across the world. The HSE'S concerns are revealed in a paper given to a private meeting of European nuclear regulators at Ljubljana in Slovania in June this year. The paper, by David Hunns, head of systems assessment at the HSE'S Nuclear Safety Directorate, warns: "The nuclear industry should not leave acting until the last minute, hoping to muddle through." The millennium bug could lead to simultaneous failures in nine different types of safety systems, including atmospheric monitoring, fire alarms and security systems. While this would be unlikely to prevent plants from automatically shutting down, it might cause cooling and lubrication to fail, warns the paper. "This would, of course, place in jeopardy the maintenance of safe shutdown. Erroneous information may be generated which, if not checked, may result in unsafe actions."

Hunns's paper discloses that "date-related problems" have already been discovered in process control, water monitoring, radiation detection and fire alarm systems at British nuclear plants. Other problems may be difficult to detect because the flawed computer programs are sometimes hidden within devices (NewSdentist, Vol 159, No 2144).

The HSE hopes that Hunns's paper will stimulate an exchange of information between European nuclear regulators, a spokesperson says. Thousands of items of equipment at over 17 nuclear sites in the UK are currently being screened. "On current trends we expect the significant issues in Britain will have been addressed before the year 2000," says the spokesperson. Members of the HSE'S Nuclear Safety Advisory Committee, however, remain concerned. One member, Bev Littlewood of the Centre for Software Reliability at City University in London has asked for the issue to be reviewed by the committee.

In a separate development, Bob Bemer, a pioneer in the digital world, claims that there might be a solution for the millennium bug after all. Bemer's list of accomplishments is more than impressive: he is credited for defining the ASCII characteristics which allow otherwise-incompatible computers to exchange text. Critics, however, say Bemer's solution, however ingenious, may be too much too late.

The unique feature of Bemer's solution, or Vertex 2000, as it has been christened, is that it expands dates "vertically" unlike other proposed solutions which expand the date fields so that they can accommodate four digits. Bemer realised that each space reserved for two-digit years contains surplus data bits. This tiny excess was enough room to "piggyback" additional information for denoting the century. He dubbed the vertically expanded characters "bigits", for Bemer digits. This efficient approach offers a huge advantage over the conventional method of "horizontal" expansion, which leads to longer files and, as a result possible computer crashes. How did Bemer know that he could squeeze the century information into the existing two-digit years? "I've been in the character-set business since 1960," he declares. "I've eaten, slept, breathed and lived character sets."

To incorporate the new bigit, Vertex 2000 makes the required changes in object code, or machine language, which a computer - but not humans - can understand easily. Traditional methods work in the more accessible world of source code, which is written in computer languages such as COBOL and FORTRAN that have comprehensible commands such as "write" and "read".

Because Vertex 2000 is supposed to do much of this conversation inconspicuously and automatically, Bemer asserts that his method will be at least 10 times faster than the other solutions currently available, and at less than half the cost. To capitalise on these possible benefits, he founded BMR Software in Richardson, Texas, USA. Expecting business to ramp up soon, Bemer says, "We're sitting here in a state of delirious excitement."

Others are also delirious but not with excitement. Making changes at the arcane level of object code gives many programmers conniptions, and not everyone is crazy over "bigits". "Bemer has got to be respected for what he's done, but his approach is so advanced in theory that you have to question whether it's practical", says Leland G Freeman, consultant with Management Support Technology in Farmingham, Massachusetts, USA. But Bemer contends that extreme approaches are what companies need right now. However, he does acknowledge that Vertex 2000 is merely a temporary fix. Adjusted programs will typically run about 20 per cent slower. Consequently, Bemer says that the companies should use his program to buy some time before a permanent solution is implemented.

That said, BMR Software had better move fast. With only a year and a half left until the new millennium, Freeman says, "by the time Bemer's solution is accepted in the market, the game could be over."