The first symptoms of schizophrenia usually appear in the late 20's, but neuroscientists now believe that the seeds for the disease are sown during foetal development 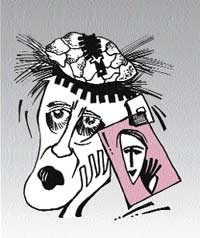 the origin of schizophrenia, has baffled researchers for a long time. Once attributed to poor communication within families, the condition is now recognised as a disease of the brain, as seen in differences between schizophrenic and normal brains.

Foetal development is the time when nerve cells grow and divide, building connections with each other. According to neuroscientists, the basic imperfection in the brains of many schizophrenics is that certain nerve cells migrate to the wrong areas when the brain is first taking shape, leaving small regions of the brain permanently out of place. Such errors in neural design may have one or more causes, which are yet to be discovered. The chief symptoms of schizophrenia include lack of interest, blunting of emotions, delusions and the hearing of internal voices. Once these, symptoms begin, they typically persist for the rest of the person's life.

The idea that these differences between schizophrenic and normal brains arise during foetal development, said David Shore, chief of schizophrenia research branch at the National Institute of Mental Health (nimh) in Bethesda, us, "is one of the leading candidates for explaining how the changes we see in the brains of schizophrenics might have come about." More than 50 per cent of the cases suggest that disorder seems to be due to abnormalities in foetal brain development.

Evidence for new theory comes from several different sources including autopsies of patients' brains, family movies taken when patients were as young as two years old and epidemiological data. A report published in the Archives of General Psychiatry showed that tissues from autopsies had neurons out of place in the prefrontal areas of seven out of 20 brains from patients with schizophrenia and in none of the 20 brains from people without the diosorder. The out of place cells are unexpectedly large residues of the neural subplate, a structure that guides other neurons to proper sites. The subplate forms around the fourth month of pregnancy. It gradually disappears almost entirely within the first month of life, having performed its task of aiming neurons towards their location in the cortex. "The migration of brain cells through the neural subplate occurs almost entirely in the second trimester of foetal development," said Steven G Potkin, a psychiatrist at University of California at Irvine and a co-author of the study with William E Burney and Edward Jones. Disruption of this migration leaves cells in the wrong place with faulty connections that is found in the brains of schizophrenic patients.

Potkin speculated that faulty genetic mechanism or environmental causes like mother having a virus that penetrates the placenta as a reason for the failure of neural subplate to perform its duties. These interfere with the operation of the neural subplate during critical months of foetal brain developments. Results were obtained by tracking every child born in Britain in the first week of March 1946, assesed every two years or so until they were 43 by the British Medical Research Council. Robbin Murray, a psychiatrist, found subtle childhood differences among those who later developed schizophrenia. One study showed at age two, abnormal children displayed slightly odd hand movements.

"A whole range of maternal problems during pregnancy that affect neural development may increase the risk of a child getting schizophrenia," said Jed Wyatt, head of the neuropsychiatry branch at nimh. "The hope is that this line of research would lead to a preventive strategy one day."