India is all set to receive a deadly cargo from USA 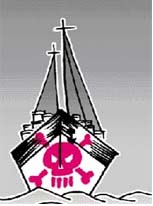 in what is termed as environmental racism, a consignment of 118 tonnes of used neuro-toxic mercury from the us is on its way to an undisclosed location in India. It is reported that a portion of the mercury has reached a purification centre in Albany, New York, from where it will be shipped to India -- there is speculation that one part of the consignment has already left for India. The stockpile is said to be one of the largest in the us and it is believed that it will be sent to a large medical thermometer factory located in Kodaikanal, Tamil Nadu. Mercury is commonly used in cloralkali plants and to manufacture medical thermometers. The mercury is being moved in what looks like containers about a metre in length and breadth -- 17 of which fit on one flat bed truck.

The consignment belonged to HoltraChem, a chloralkali manufacturing company based in Orrington, Maine, usa where the lethal metal was used to convert saltwater into chlorine and caustic soda. Over the years, many organisations protested against HoltraChem's mercury emissions that polluted many waterbodies, including the Penobscot River. The pressure intensified when the plant recorded seven mercury spills between 1997 and 1998. On September 15, 2000 the plant was finally shut down.

Since the deadly stockpile had to be still disposed off, Governor Angus King of Maine and many citizen groups from Maine approached the us department of defence to help them store the stockpile. This is because the Defence Logistics Agency maintains facilities to store such waste in several locations throughout the us . But the department refused the request saying that the waste did not belong to the state. DF Goldsmith and Metal Corp, a metal broker firm based in Evanston, usa , then bought the stockpile.

Without any strict laws on trade of mercury, the consignment is cleverly surpassing whatever restriction exists. The Basel agreement on the ban of exports and imports of hazardous wastes is recognised as a law by the Supreme Court of India in its ruling in 1997. Despite this agreement, the consignment will be allowed to be exported as "this material will be slightly refined prior to export. It will, therefore, be defined as a product and not a waste," says Jim Puckett of the Basel Action Network. The Basel Parties agreed to ban all exports of hazardous wastes from the Organisation for Economic Cooperation and Development (oecd) countries such as usa to non-oecd countries such as India. "While this ban is not in strict legal force yet, it is considered morally binding on the Parties," he says.

Although refined, the mercury is just as harmful as it would have been as a waste, says Puckett. Mercury is known to be one of the most lethal metals and can cause severe neurological problems, particularly to children, as they are prone to more exposure. It is potentially dangerous to foetuses, women of child-bearing years and pregnant women. Studies warn that at least 60,000 babies every year in the us could have lower iq mothers who consumed mercury-contaminated food. Considered to be a global pollutant, as it is travels by wind and rain all over the globe, mercury is bioaccumulative and moves up the foodchain.

Because of health and environment reasons, mercury-based products are slowly being phased out in the us . While places such as Boston, San Francisco and the state of New Hampshire have banned mercury thermometers, manufacturers of these have started producing only digital ones.

DF Goldsmith has been exporting mercury to India for sometime now. They shipped about 20 tonnes of mercury on January 20, 2000 to Mumbai, where they shipped another 16.5 tonnes on March 3, 2000. The first consignment was routed through Taiwan and the second through Sri Lanka. India is the largest recipient of mercury exports from the us . In 1999, the us exported 180.54 tonnes of mercury, out of which India was sent 85.45 tonnes, followed by Singapore (18 tonnes), Spain (17 tonnes), and Hong Kong (16 tonnes).

Says Madhumita Dutta of Toxics Link, a Delhi-based non-government organisation: "The us does not want its workers and environment to be exposed to mercury. So it sends it to countries like India where thermometers are manufactured and sold back to the us ." Michael Belliveau of Natural Resources Council of Maine, has discovered that a plant in India exports as much as 35 per cent of the total annual us import of two million thermometers.

The buzz is that the issue exposes the loopholes that shroud the policies regarding hazardous material. While efforts are on to stop the consignment, the us is under criticism from its own citizens. "I think it a sad commentary that a federal administration that prides itself on -- and even brags about -- its environmental record cannot influence their own administrators to do the right thing, especially in a Department of Defence lead by a former United States senator from the state in which the problem is located," says Arthur Rocque, commissioner of the Connecticut department of environmental protection.

Meanwhile, the Indian dock workers association is all set to stop the consignment from landing in India. They have also taken a decision not to off load the consignment on any of the ports.