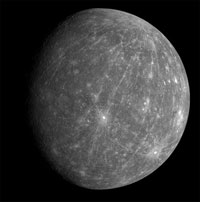 A new study has attributed the dull, dark surface of Mercury to comet dust. According to a report published in the journal, Nature Geoscience, the planet’s surface was painted black by passing comets over billions of years.

Mercury reflects very little light and its surface is darker than that of the Moon. Normally, iron-bearing minerals and submicroscopic metallic iron cause darkening on airless bodies, the study says.

But the surface of Mercury has low iron content and researchers arrived at the conclusion that “delivery of cometary carbon by micrometeorites (extraterrestrial particles) provides a mechanism to darken the planet’s surface”.

“Carbon delivery by micrometeorites provides an explanation for Mercury’s globally low reflectance and may contribute to the darkening of planetary surfaces elsewhere,” the study reads.

How is darkening caused?

As Mercury is closest to the Sun, it is exposed to a higher rate of comet bombardment. Comets (icy space rocks in the solar system) are rich sources of carbon. When comets come near the Sun, they crumble and produce a carbon-rich dust.

Carbon darkens Mercury’s surface and evades detection by most remote sensing methods. Apart from comets, micrometeorites are an additional source of carbon on Mercury.

The research team tried to find out how much carbon has been deposited on Mercury’s surface. Projectiles were fired at a sugar-coated basalt rock to confirm the darkening theory. The experiment showed that tiny carbon particles become deeply embedded in the impact-melted material, a press release by US-based Brown University reads.

“It’s long been hypothesised that there’s a mystery darkening agent that’s contributing to Mercury’s low reflectance,” Megan Bruck Syal from Lawrence Livermore National Laboratory, one of the paper’s authors, was quoted by the BBC as saying.

“One thing that hadn’t been considered was that Mercury gets dumped on by a lot of material derived from comets.”

Syal’s calculations suggest that after billions of years of bombardment, Mercury’s surface should have anywhere from 3 to 6 per cent carbon.

Mercury's dark surface has long been a mystery to scientists.

“We show that carbon acts like a stealth darkening agent,” Peter Schultz, professor emeritus of geological sciences at Brown University and co-author of the new research, said. “From the standpoint of spectral analysis, it’s like an invisible paint.”

And that paint has been building up on Mercury’s surface for billions of years.

“We think this is a scenario that needs to be considered,” he added. “It appears that Mercury may well be a painted planet.”