Mercy of a toxic plant

Jatropha can offer relief from pain without side effects 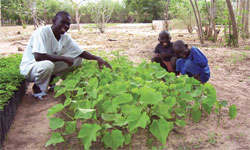 WHETHER taken for severe ailments like cancer or used occasionally for minor pains, painkillers have side-effects. It can be anything from lethargy and constipation to kidney or liver dysfunction. This is the reason scientists have lately turned to nature and are exploring traditional medicines in search of a drug with minimal side-effects. Two agriculture scientists from Nigeria, on a similar quest, have found that jatropha (Jatropha curcas), known as a biodiesel crop, can be used as an effective painkiller.

People across Africa have traditionally been using this semi-evergreen poisonous shrub for various medicinal purposes. Its seeds act as laxatives, sap or latex can heal wounds and leaves, when brewed and consumed, are believed to ward off malaria. The shrub is also used to treat and manage body pains by several communities in Africa as well as Asia where it grows in abundance. According to M R Gururaja Rao, head of the department of Genetics and Plant breeding at University of Agriculture in Bengaluru, several communities in India use the latex of jatropha leaves to treat toothache and similar problems.

To explore the plant’s analgesic property, Omeh Yusuf and Ezeja Maxwell of Micheal Okpara University of Agriculture in Abia state extracted the physiologically active components of jatropha leaves using methanol as solvent. Using standard laboratory animal tests, they compared the effects of this extract at 100, 200 and 400 milligrammes per kilogramme of body mass of the animals, against that of aspirin (acetylsalicylic acid).

Their observation revealed that 100 mg/kg of jatropha extract was not effective. However, at doses of 200 mg and 400 mg, jatropha extract offered the same pain relief as aspirin. Unlike analgesic drugs that work either on the peripheral or on the central nervous system to offer relief, the extract probably works through both the nervous systems, the researchers noted in the July issue of the International Journal of Biomedical Engineering and Technology.

They are now carrying out more research to isolate the active ingredient in the extract and determine its exact mode of action.

Rao, however, says one should be careful while carrying research on this plant or using it for medicinal purposes, because the plant has toxic properties.