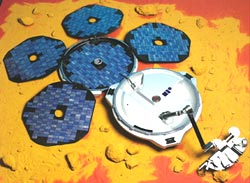 We may celebrate Christmas Day this year in the name of science. On that day, the 400 million kilometer voyage of Beagle 2 will end: it will land on Mars, culminating Europe's first mission to explore other planets. In what is clearly a race with the us, it will try and answer two of the greatest puzzles in space: whether water exists or has existed on Mars and whether there are the remains of carbon-based lifeforms on its surface.

Of course, the us-based National Aeronautics Space Agency denies there's any competition with the European Space Agency; but two American mobile geological landers, Spirit and Sojourner, are due to arrive in Mars in January and seek largely the same goals.

Beagle 2 is named in honour of hms Beagle, the ship that took Charles Darwin, the pioneer of the theory of evolution, on his historic 1831-1836 trip around the world.