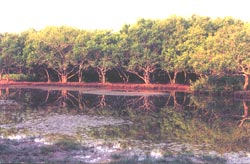 bioaccumulation of metals in certain plants has attracted a lot of attention for monitoring of pollution. India too has seen new studies throwing up interesting research in the field.

During a recent study, traces of heavy metal have been found in the samples of five mangrove species in the Bhitarkanika mangrove region of Orissa state, off the east coast of India in the deltaic region of Brahamani and Baitarani rivers. The study, conducted by researchers from Tamil Nadu-based Annamalai University, is the first to examine metal concentration in mangroves of Orissa's east coast.

The concentration of metals analysed was found significantly less in the leaves than in the sediment. "The concentration and accumulation of heavy metals in sediments is closely related to the frequency and duration of the tidal flood," says R K Sarangi, co-author of the study. He also notes that river pollution is another important cause of it. "As such there is no industrial belt around the study area or along the riverine system. But the rivers flow along areas like Sukinda, which are rich in minerals like zinc and iron. The minerals might be there in higher quantity in ambient water than the trace amount normally contained, and they must have flown down," he adds.

Within the five species also differences were recorded. This is natural as Avucennia officinalisis is known to accumulate more heavy metals as it excretes out salts and the rhizophoraceae family mangroves are known to have lesser metal content due to the salt-exclusion mechanism that is operative in the species.

Sarangi suggests that a long-term study for about two to three years done over varying time scales like monthly, seasonally, annually with respect to different biotic conditions could be a more systematic way of studying bioaccumulation in the mangroves as an indicator of pollution levels or any unwanted change in the ecosystem.