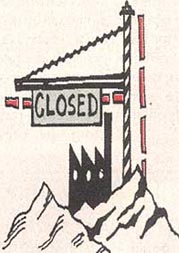 The world's most polluted metropolis, Mexico City, had to perforce observe a smog emergency for three days in the last week of January after ozone levels shot up to 269 points - 19 points higher than the safe leveL In spite of clear skies, the smog levels remained high. While smog emergencies are nothing new - Mexico has seen 20 such emergencies in the last three years - environmentalists are sbouting hoarse that the city authorities are as usual giving the health of the 20 million inhabitants of the capital a low priority by allowing the emergency threshold to remain so low. The World Health Organization considers 100 points to be the safe limit.

Thousands of cars were kept off the streets and factories cut down their production by 30 per cent in a bid to contain the threat by bringing down the ozone level. Hundreds of gas stations were also closed down. The restrictions paid off as the ozone levels were brought down, reducing the intensity and the quality of airborne pollutants. High concentrations of ozone, an invisible gas, can cause respiratory problems, headaches, sure eyes and nausea.