A device that helps generate electricity from human faeces 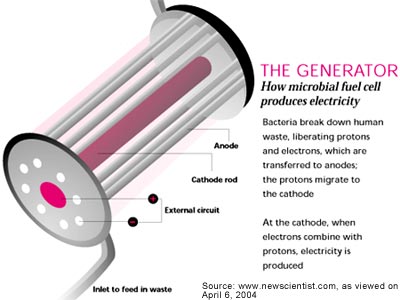 researchers from us-based Pennsylvania State University have developed an electricity generator that is fuelled by human waste. The device, the microbial fuel cell (mfc), could prove useful in developing countries. Many of these nations need large-scale waste-processing plants, but find them prohibitively expensive, largely because of the high power requirement. Offsetting this cost by producing electricity while treating waste, could make all the difference, says Bruce Logan, the lead researcher.
Human waste mainly contains undigested food comprising organic matter such as carbohydrates, proteins and lipids. Bacteria in some conventional sewage treatment systems use enzymes to oxidise the organic matter; in this process, electrons (particles that are primary carriers of electricity in solids) are released. Normally, the electrons power respiratory reactions of the bacteria's cells, and eventually combine with oxygen molecules. However, by depriving the bacteria of oxygen on one side of mfc, the electrons can be used to power an external circuit.

The mfc comprises a 15-centimetre-long can with a central cathode rod that is surrounded by a proton exchange membrane (pem). Eight anodes (long, slender graphite rods) are arranged around the cathode. Bacteria cluster around the anodes and break down the organic waste as it is pumped in, releasing electrons and protons. With no oxygen to help mop up the electrons, the bacteria's enzymes transfer them to the anodes, while the protons migrate to the central cathode. Molecules on the pem encourage the protons to pass through the cathode. There they combine with oxygen from the air and electrons from the anodes to produce water. During the transfer of the electrons from the cathode, a voltage is created, enabling the mfc to power an external circuit.

The team's device is the first mfc that has been designed to produce electricity by processing human waste. Previous designs run on glucose solutions. The new design is only producing one-tenth of its potential power output. If scaled up, the system could produce 51 kilowatts of power from the waste of 100,000 people, claims Logan.

But microbiologist Derek Lovley of the us-based University of Massachusetts believes generating power from wastewater on a large scale is a distant dream. "The technology is currently at the state of development that solar power was 20 to 30 years ago. The principle has been shown, and it is indeed very promising. But there is a lot of work to be done before this is used on a commercial scale," concludes Lovley.