Smaller and more powerful than the conventional, 'neo' magnets may capture half the world market for permanent magnets by AD 2000 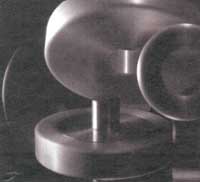 THE 'movers and shakers of modern technology', magnets attract little notice. Now a quiet revolution is underway, with the discovery of new materials that could provide greater magnetic potency in smaller packages. The discovery of 'neo' magnets by Sumitomo and General Motors in 1983, strongly influenced modern technology. Made from a compound of iron, neodymium, and boron, these levitating magnets are 10 times more powerful than ferrite magnets, and over 100 times as powerful as steel magnets.

The development of neo magnets is the latest step in a series that stretches back to the time of Plato. The only material known to humans at that time was lodestone, or magnetite, an oxide of iron with the formula Fe304, Magnetite continued to be used as a material for permanent magnets until the early 18th century, when strong magnets made from carbon steel were first produced in the UK. Advances in steel-making in the 19th and early 20th centuries led to the discovery of alloy steels. Steel magnets were surpassed in the 1930s by iron- based magnets and hard ferrites were introduced in the 1950s.

But the most exciting advance was the introduction of rare-earth magnets in the 1970s and 1980s. The unsur passed coercivities and energy product of these materials meant that small magnets could do the same job as the much larger ferrites. Applications of these magnets in motors and other devices began to grow rapidly. Still, the high cost of these early rare-earth magnets limited their use mainly to military applications. They also found a niche in small commercial products such as wrist watches, where the amount of material needed is so little that manufacturing costs predominate over raw material costs. A typical quartz watch, for example, contains a rare-earth magnet of barely two to three millimetres in diameter.

When used in conjunction with magnetically sensitive electrical elements, these magnets make possible a variety of systems for monitoring position, velocity, torque, and other aspects of automotive, aircraft, and industrial control systems. A car's cruise control, for example, relies on such magnets. By retaining information about the direction of a magnetising field, tiny magnetic particles store most of the world's data including personal information on credit and ATM cards, movies on video-tape, and information on a computer's hard disk.

Neo magnets are now rapidly replacing the earlier cobalt-samariurn rare-earth magnets in many applications. They are also opening up new applications for permanent magnets, such as in high-power electric motors, that had previously relied upon electro magnets. The dramatic rise in coercivity and energy production has allowed substantial reduction in the size and weight of motors and speakers.

The technology on which neo magnets have probably exerted the greatest impact is that of electric motors. Neo magnets have allowed the construction of efficient 1,000 hp motors that are five times lighter and smaller than traditional motors of the same power. In magnetic resonance imaging systems, the best permanent magnet so far is the neo. Generating a magnetic field of 0.2 tesla requires 21 tonnes of ferrite magnets but only 2.6 tonnes of neo magnets. However, neo magnets have their short-comings, such as a low resistance to corrosion, a rapid decrease in performance as temperature rises and a relatively high cost.

Where material cost remains the dominant consideration, ferrite magnets are used. But for a rapidly growing fraction of magnet applications, neo magnets are being chosen to do the job. The production and use of neo magnets has grown rapidly. If the trend continues, neo magnets will account for close to half of the permanent magnet market by 2000. The multitude of magnets that enhance our daily lives remain hidden. Yet, magnets are ubiquitous, providing the steady magnetic fields that exert force on current- carrying wires to make electric motors spin and loudspeakers blare. Magnets are thus literally the movers and shakers of modern technology. And neo magnets will be more often doing the moving and shaking from now on.