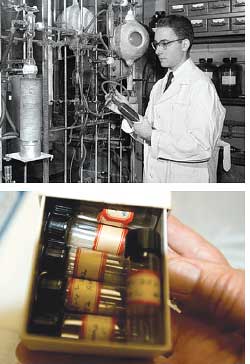 Life's origin may lie in volcanic eruptions 3.5 million years ago

the event that sparked life is often described as akin to a whirlwind spinning through a scrapyard and leaving behind a fully assembled jet. New research suggests this spectacular event was actually a volcanic eruption, some 3.5 billion years ago.

This research draws on a study conducted by Stanley Miller of the University of Chicago. In 1953, Miller took two flasks which were connected to each other. One of the flasks contained water to represent a primeval ocean and the other had hydrogen, ammonia, and methane--the gases he thought were in Earth's atmosphere billions of years ago. The gases were zapped with an electric spark. After running the experiment for a few weeks, the water turned brown. When Miller analyzed the water, he found it contained amino acids, the precursor of proteins. The experiment showed how simple molecules could be assembled into more complex molecules necessary for life by natural processes like lightning in Earth's primordial atmosphere. But there was a problem. Analyses of ancient rocks convinced scientists that Earth's earliest atmosphere was not rich in the gases Miller used. Hence, many researchers thought Miller's experiment wasn't an accurate re-creation of the early Earth.

Now, two former graduate students of Miller's -- geochemists Jim Cleaves of the Carnegie Institution of Washington, Jeffrey Bada of Indiana University--and colleagues re-examined the samples left in their mentor's lab. They said Miller actually ran three slightly different experiments, one of which injected steam into the gas to simulate conditions in the cloud of an erupting volcano. "We found that in comparison to Miller's classic design everyone is familiar with, samples from his volcanic apparatus produced a wider variety of compounds," said Bada in the October 17 issue of the journal Science.

Using extremely sensitive mass spectrometers at nasa's Goddard Space Flight Center, Bada found traces of 22 amino acids in the experimental residues. That is about double the number originally reported by Miller and includes all the 20 amino acids found in living things. The volcanic apparatus was only slightly different to the classical apparatus. A narrowing in one glass tube increased the flow of steam that passed through the electrical current.

Bada added that volcanoes were active 3.5 billion years ago and the organic precursors for life could have been produced when lightning passed through tidal pools around volcanic islands, even if hydrogen, methane, and ammonia were scarce in the global atmosphere.