SC/ST, OBC groups swindled out of their mining leases 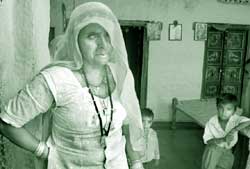 a major mining scandal in Rajasthan's Jodhpur and Jaisalmer districts has been exposed in the past few months. Several cases have come to light of upper caste influential people fraudulently getting quarry licenses issued or renewed in the names of individuals belonging to the scheduled castes (scs), scheduled tribes (sts) and other backward castes (obcs). Many actual leaseholders are completely ignorant that they are official owners of quarries, and continue living in penury. Some know about it but can do little to change the situation.

Nemaram Meghwal's case is shocking. A resident of Gandero Ki Dhani village in Jodhpur district, he died fighting tuberculosis in September 1992, oblivious to his ownership of a quarry license. For most of his life, he worked as a labourer in Kaliberi sandstone quarries. That he owned a quarry license would perhaps have remained a secret, had a notice from the state's mining department not landed in his house in August 2004, informing his widow, Sujidevi Meghwal, that the lease had been cancelled. "I was shocked...I simply did not know what to do," recalls Sujidevi.

The mining department's records reveal that the license for quarry number 229 in Pabumagra area, issued in Nemaram's name, had been renewed 10 times, thrice after his death. The initial application for the license was received in Nemaram's name on July 12, 1973. There were two other contending applications. The license was granted to Nemaram for five years on October 16, 1973 on the ground that he belonged to the sc/st category. But the signatures on its renewal applications were found to be in the names of Bhanwar Singh, Hukma Ram and Dalpat Singh. There were other signatures too, which were illegible. Regular rent and fees were also deposited at the time of the renewals. The last rent of about Rs 4,000 was paid in 2003, when the lease was renewed till June 30, 2005.

Nemaram's family says after the case was exposed, many people have tried to make them sign certain papers. Sujidevi says quarry 229 is under the control of one Dalpat Singh Narwa of the Rajput community. "Dalpat Singh came to visit me and requested to settle the matter, but I refused." But fighting the mighty is not easy. Her son Chainaram Meghwal complains: "Villagers have been forcing us to make a deal."

Cases like Nemaram's were exposed due to an October 2003 order of the Rajasthan High Court (hc) in the Ashwini Chaubeesa versus state of Rajasthan case. The court ruled that no mining activity should be undertaken in the state without the consent of the Rajasthan State Pollution Control Board (rspcb). Soon after, the state's Department of Mines and Geology (dmg) put up a notice in all leading newspapers, asking license holders to obtain the necessary consent orders. "It has always been mandatory to obtain the rspcb's consent, but this was never followed," says Diwan Singh Deora, senior mining engineer, dmg. On May 16, 2004, the first notice was issued to all those who had failed to get the approval. The notice about the cancellation of the leases, which reached Sujidevi, was issued on August 16, 2004.

It has, however, become evident now that mining problems in the area are not confined to quarries operating without the rspcb 's approval. As Chainaram says: "There are numerous cases in our village where quarries belonging to people of sc/st and obc groups are being operated by people of higher classes. Most people do not even know that they hold the leases." Concurs Bishna Ram, head of Pathar Khan Kamgaar Union, a Jodhpur-based union of unorganised mineworkers: "It is a common practice...Most people belonging to sc/st and obc categories do not have the financial means to make an initial investment of over Rs 1 lakh to operate a quarry and, so, influential people buy these leases from them for small amounts."

"More than 60 per cent of quarries belonging to sc/st and obc communities are operated by other people," claims Rana Sengupta, head of Mine Labour Protection Campaign, a non-governmental organisation. "There are no signboards to declare the details at quarry sites, although these are mandatory." Down To Earth visited the Pabumagra area and found the allegation about signboards to be true. One Sham Singh, who claimed to be the owner of quarry number 230, said quarry number 229 (Nemaram's quarry) belonged to Dalpat Singh but it had been dysfunctional for a long time.

The government doesn't deny the existence of the problem but feigns helplessness. Says Deora, "More than 7,000 quarry licenses have been issued in Jodhpur. It is not possible for us to know each one personally. Moreover, physical verification is not necessary for granting a quarry license." The state's minister for mines Laxmi Narayan Dave also refuses to take responsibility: "If people give out their lease to other people then what can we do about it?...Our responsibility is only till the time the lease is granted." But the minister agrees the problem concerns the misuse of a government policy.


The Rajasthan Minor Mineral Concession Rule, 1986, provides for granting quarry licenses on priority to "manual workers belonging to sc/st employed in mines" and "persons belonging to sc/st ". Later, obcs were also added to the group. The policy permits the transfer of the lease, but only within the same category.

The worrying fact is that this is not the first time the misuse of the policy has been revealed. A committee constituted by the hc in 1992 in a civil writ petition "dealing with mining, environmental and water problems of Jodhpur" had also highlighted it. "Of over 6,125 mines...the committee found 4,572 licenses issued to upper classes and 1,552 to sc/st classes. During the committee's visit to several areas neither could we locate sc/st actual allottees, nor could we verify mines belonging to them. This needs to be investigated further," reads its report. The hc had instructed the state government to implement the committee's recommendations, but the latter chose to ignore it.


More alarming is the realisation that it isn't just the reservation policy being misused. Numerous cases in Jaisalmer district reveal that the mining mafia is blatantly flouting many other rules. According to the mining policy, only two mining leases can be granted to one name. "But there are many cases in our village where one person is operating up to 20-30 leases," says Sheraram Sundaniya, resident of Jethwai village, about 10 kilometres from Jaisalmer. These leases are also taken in the names of local villagers belonging to sc/st communities. This, despite the fact that unlike in the grant of quarry licenses, no preference is given to sc/st and obc candidates in mining leases, which are given on a first come first served basis (a quarry license is for 30.48-60. 96 metres, for 2-5 years, while a mining lease is for an area of one hectare, for 10-20 years). But Jethwai's residents believe local people are given preference.

Proxy-lease cases abound in and around Jethwai: "Mining lease [limestone] number 522/03 in the name of Magaram Bhil and number 151/04 in the name of Natharam Bhil are being operated by some other person," alleged Sundaniya. Down To Earth met Magaram Bhil and found this to be true (see box: The game). Ugaram Bhil, a daily wage labourer, also recalls a lease being issued in his name. "I only put my thumb on the papers. Later, that lease was sold by the person who operated it. I have lost track," he says.

Meanwhile, after Nemaram's case was exposed, the state's mining department is doing some damage control. "We have now made it mandatory to produce a photo of the license holder and a identity proof at the time of issue or renewal of the license," offers Deora. But is this enough?