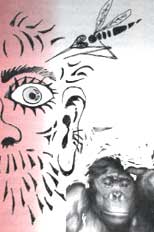 EVOLUTION has moulded living creatures in such a manner that their ability to survive an reproduce is constantly improving. on a rough sense, one may say that given two populations, one of ancestors and a second of descendants, the descendants will carry a subset of ancestral genes: genes which contribute to a higher fitness are more likely to persist and spread than those genes that are relatively less capable of doing so.

Renowned biologist J B S Haldane had said more than forty years ago that the course of evolution has been moulded to a large extent by disease and disease-causing organisms. A con- temporary look at Haldane's thesis from the specific angle of malaria is the subject of a recent article by G Pasvol of the Imperial College School of Medi- cine, UK (The Lancet, Vol 348, No 903 1).

Because the signature of evolutionary change is a change in the genetic make-up of organisms, the first thing to ask is, are there genes that look as if they have evolved in the course of the fight against malaria? It appears that there may be two such sets, both recognised by the diseases they can lead to. One disease is known as sickle cell anemia and the other, thalassemia. Both are due to changes in the sequence of the DNA that codes for haemoglobin, the protein that transports oxygen to the tissues. Note the seeming paradox: the genetic changes that we are talking about are both helpful (if they help us counteract malaria, that is) and harmful (because they demonstrably also cause disease). The sickle cell part of the story is reasonably well understood.

There is a variant version, or allele, of the normal ('A') haemoglobin gene and it is known as the s allele. Individuals with two copies of the s allele suffer from severe anaemia, but those with one copy of s and one copy of A are resistant to malaria whereas those with two copies of A are not. The basis of the resistance can vary. The s allele can affect the entry of malarial parasites into red cells, or the development of parasites within infected cells, or cause the removal of infected cells from the system, or all three. Therefore, it persists in the population by virtue of its presence. SS combinations, meaning individuals suffering from sickle cell anaemia, are born in every generation. As one might expect on the basis of this correlation, the s allele tends to be found in those parts of the world that have had a history of malarial infection.

The thalassemia story is not as clear. What is becoming evident, though, is that thalassemia has affected human genes in a big way. An intriguing finding that has emerged recently is that individuals with alpha thalassemia have higher risks of clinical malaria (invasion of red cells by the parasite) than others, a paradoxical finding if the gene is supposed to offer protection. The suggestion made by Pasvol and co-workers is that such clinical infection might act as a live natural vaccine and hasten the acquisition of immunity from the disease itself. Unfortunately, it is not easy to prove this hypothesis because as of today there is no clear-cut laboratory method of demonstrating immunity against malaria.