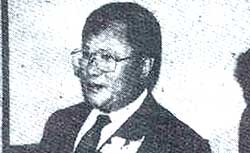 The Meghalaya government is taking no chances even though uranium mining in the state has been given a clean chit by a high-level team led by Atomic Energy Commission chairperson R Chidambaram.

Chief minister S C Marak says he will send a multi-party delegation to the uranium mines in Jaduguda, Bihar, to study the safety aspects of mining operations there.

Uranium reserves of 9 million tonnes have been discovered in the Domiasiat region in the West Khasi hills, but the ruling coalition and the opposition differ strongly on the dangers from radiation that may result from uranium mining.

The state assembly has been convulsed in a debate on safe mining operations. Opposition leader Hopingstone Lyngdoh of the Hills State People's Democratic Party, wants a total ban on uranium mining, alleging it has already killed fish and vegetation in the state. The government has responded by bringing in geologists and nuclear physicists to counter these charges and Chidambaram assures uranium mining "would have no effect either on the health of the people or the environment". He says there is no need to evacuate people from the mining area.

But with the opposition in no mood to be pacified, especially as it purports to have photographic proof to back its stance, and the government determined to get the mining project cleared, Meghalaya will simmer with tension for yet some time.