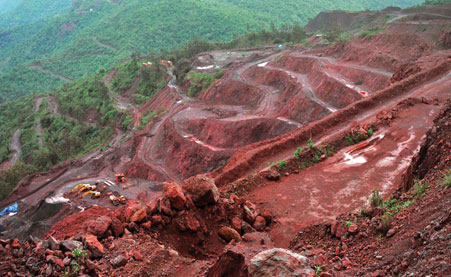 THE UNION Ministry of Mines has responded coldly to the recommendations of the M B Shah Commission on curbing illegal mining of iron and manganese ores. In its response, filed in December last year, the ministry also seemed at loggerheads with the state mining departments over their suggestion to ban export of the minerals to check illegal mining. The commission was set up by the Centre in November 2010 to look into the growing illegal mining of the minerals and suggest remedial measures.

While preparing its report, the commission took cognisance of the views of states on illegal mining. Most of them put the onus of illegal mining of the ores on the Chinese demand during the Beijing Olympics and booming export market. The states suggested banning export of the minerals, the commission notes in its interim report submitted in July last year.

The mines ministry has rejected the suggestion. In its response to the commission’s report, the ministry notes that it is not exports of minerals but poor governance at the state level that has left illegal mining unchecked.

The commission’s report, however, highlights how high-export prices are fuelling large-scale illegal mining of the ores in many states. This has led to increased corruption and mafia activities besides loss to the exchequer. Karnataka, for instance, lost around Rs 16,000 crore due to illegal mining between 2006 and 2010 (see ‘How Bellary was laid waste’, Down To Earth, August 16-31, 2011). The commission recommends banning exports of the ores until an “effective” enforcement agency is in place to check illegal mining.

Ministry on the defensive

Poor implementation or misuse of mine-related laws is another major reason for illegal mining, says the commission. For instance, the provisions around renewal of mining lease involving deemed extension as laid down in the Mineral Concessions Rules of 1960 are often misused. If the state government does not respond to a renewal application within a stipulated time period, the mining lease is deemed to have been extended till the state passes further orders. In Odisha, 215 of the 341 operating mines are working under deemed extension. Such “deemed extensions for unlimited period” open windows for illegal mining, the report says. The commission suggests limiting this period to one year. 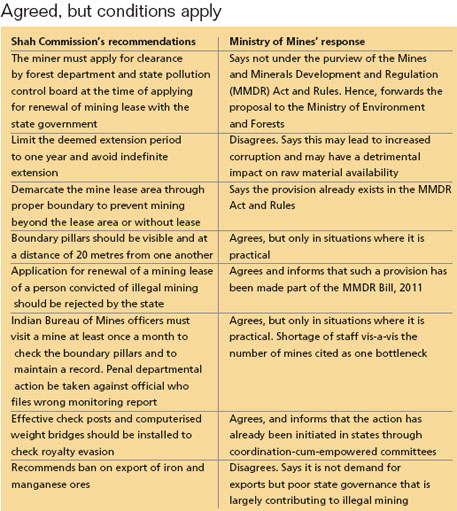 The ministry, in its response says, limiting the deemed extension period may lead to increased corruption. A ministry official, who did not want to be quoted, criticises the report for categorising all kinds of irregularities in the mining activity as illegal. “Illegal mining is best described as any mining activity in an area by a person who does not hold the appropriate lease or licence. A clear distinction needs to be made between non-compliance with forest or environment-related laws and what is illegal mining,” says the ministry official.

The ministry, however, acknowledges the Shah Commission’s observation that lack of coordination between the mines and the forest departments is fuelling illegal mining.

The commission report points out that a large number of mines in the state are working without the required approval under the Forest Conservation Act (FCA) of 1980. In several cases the forest area approved under FCA is less than that approved as per the mining leases. Such clear lack of coordination between the mines and forest departments also leads to illegal mining, the report points out.

“The isolated workings of officials of the mines ministry, the Indian Bureau of Mines and the state pollution control board has been one of the main causes for inability to keep illegal mining under check. When all these people only look at their individual area of concern, the bigger picture fails to emerge and that creates a problem,” says the ministry official.

Based on the commission’s interim recommendations, the ministry has ordered all states to immediately coordinate and share information internally and with other important ministries and departments like railways, customs and ports.

The commission also suggests ensuring that boundary pillars marking the mine lease area are properly placed and made of concrete. Miners are often found mining or dumping mine wastes outside the lease area. Six mines in Andhra Pradesh’s Anantpur district were found mining illegally in the adjacent Bellary reserve forest. To keep such illegal activities at bay, the concerned authorities must check the boundary pillars every month and maintain a record of it. If at the time of lease renewal it is found that a company is mining outside of the lease area, the application may be rejected. The report recommends a penal departmental action against an officer if his or her monitoring report is found faulty.

It acknowledges that lack of effective enforcement and proper check posts, presence of mining mafia in some areas and shortage of adequate staff and infrastructure are the other reasons for growing illegal mining. To address this, the commission suggests the capacity of state authorities be strengthened.

The ministry in its response has said it has initiated steps like forming district-level task forces, setting up coordination-cum-empowered committees, framing state mineral policies and strengthening the directorate of mining and geology in states.

The commission deems it appropriate to “prohibit” mining leases in certain cases to uphold the conservation of minerals. Natural resources should not be “frittered away” by just one generation and need to be conserved, the commission’s report says.