Ministry of environment and forests may undergo bifurcation 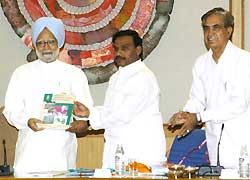 prime minister Manmohan Singh has given final clearance to establish a Wildlife Crime Control Bureau (wccb). This was decided in a meeting of members of the National Wildlife Board (nwb), chaired by him on June 19, 2006. The prime minister's office (pmo) also proposed to bifurcate the Union ministry of environment and forests (moef) into separate departments of environment, and wildlife and forests, functioning under the same minister.

The wccb will be armed with investigative powers to curb poaching and illegal trade. Legal powers are to be provided to army commanders under the Wildlife (Protection) Act, 1972, to contain poaching in border areas. However, setting up of the bureau will require an amendment in the act and for that a bill will be introduced in the monsoon session of parliament, said the Union minister for environment and forests A Raja.

The moef , sources say, has not welcomed the proposed separation of the ministry, but the pmo has been pushing for it. moef was also at odds with the pmo's suggestion to consider Indian Forest Service officers for top posts in forest and wildlife department. But conservationists feel the proposed separation will help control habitat destruction and other threats to Indian wildlife.