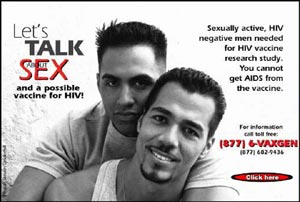 the first ever aids vaccine to be tested on a large number of people has not been able to protect them from hiv infection, admitted Vaxgen, the vaccine's us-based manufacturer. But controversially, it tried to put a positive spin to this failure by announcing the vaccine, called Aidsvax, seemed to protect African-Americans and some non-Hispanic minorities.

The failure, after four years of intensive research on the project, must be a bitter pill for the company to swallow. Vaxgen was hoping the vaccine would prevent 30 per cent of the infections -- enough to apply for commercial launch, but far lower than that normatively expected of other vaccines.

Aidsvax was made from gp 120, a protein that protrudes from the surface of the hiv virus and helps it dock on to the cells of the immune system. It was designed to provoke the immune system into making antibodies that would latch on to gp 120 when the virus infected the body, thus preventing the spread of the virus.

Aidsvax was the first among such vaccines to reach phase 3 of clinical trials (the final stage before marketing rights are sought), and so the interest in the test results were intense. The trial was conducted at 59 sites in the us, Canada, Puerto Rico and the Netherlands. It involved 5,400 volunteers, none of whom were infected with the disease when the trial started.

Two-thirds of the participants were given a series of seven shots over three years, while the rest were given the same number of placebo injections. Two years after treatment, 5.8 per cent of those who had received the placebo were infected. Vaxgen claimed that among blacks, the efficacy rate of the vaccine was 78 per cent, but the actual cases of infection this statistic was the basis of were only 13.

Of course, researchers were sceptical about other aspects of the Vaxgen approach to find an aids antidote. Vaxgen's aim was to create a vaccine that elicited antibodies against subtype b of the hiv virus, the most common form occurring in Europe and the us. It was pointed out that in sub-Saharan Africa, where nearly 30 million aids patients reside, the main sub-types were a and c.

Vaxgen has said it would seek a licence to market the vaccine to African Americans and other ethnic minorities in the us, in whom the vaccine seemes efficacious. But it also admitted that the Food and Drug Administration, which licences medicines in the us, might ask it conduct further research.