Is the new Indian anti-cancer drug any good? 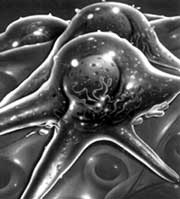 an anti-cancer drug which specifically targets the cancer cells and not the normal cells has entered the market. Unlike the conventional methods like chemotherapy which have their toll in the healthy cells also, the new smart drug zeros in only on the cancer cells.

Under the guidance of Manju Ray, researcher at the department of biological chemistry at the Indian Association for the Cultivation of Science, Kolkota, a team of five researchers studied the effect of an organic compound, methylglyoxal, on cancer patients. The chemical is present in coffee and tobacco smoke and is also produced by bacteria present in the intestinal tract of human beings. Though the chemical can cause genetic aberrations, it is not classified as a human carcinogen. But when the chemical accumulates in the cell in high quantity it kills the cell. This characteristic of the chemical can be used to destroy cancer cells that have undergone mutations. Some experts suggest that one reason for the cancer cells not dying is that they lack chemicals such as methylglyoxal and ascorbic acid which are known to cause cell death. In vitro tests show that the chemical inhibits the process of respiration through which the cancer cells produce energy for its survival.

During the trials for the drug, twenty four patients suffering from different types of cancers such as that of the colon, liver, ovary, lung and blood were selected for the study. Most of the patients were in an advanced stage of the disease and conventional medicines had failed to provide relief. The patients were advised palliative care in the absence of an effective treatment. The patients were given the chemical orally four times a day so that they received around 20-25 mg methylglyoxal per kg of body weight per day. The treatment was supplemented with vitamin c . After 8-10 weeks, the dosage was reduced and after another 15 weeks, the dose was further reduced or discontinued depending on the condition of the patient. The duration for which the patients received the treatment varied from 10 months to 15 months. At the time when the report was published, 11 patients were found in an excellent condition and five in a good condition. Three patients had died during the treatment and five had opted out.

According to Vinod Kochupillai, chief of the Institute Rotary Cancer Hospital and head of medical oncology at the All India Institute of Medical Sciences, New Delhi, the data is not sufficient to comment on the efficacy of the drug. "It is not enough to say that the patient is in excellent condition. There are tests available to show whether cancer has reduced and this data would have been very helpful," she says. Though she hopes that the drug works, she feels that it is too premature to comment on its efficacy. She believs that the duration for which the patients have been under observation is too short. "Patients should be observed for at least two years before the drug can be considered effective," she says. A senior Delhi-based oncologist, whishing to remain anonymous says, "I would not like to put my patients on the drug on the basis of these results only," she emphasises.

Manju Ray agrees that the drug needs to be researched upon further. Dabur plans to market the drug within the next two years.