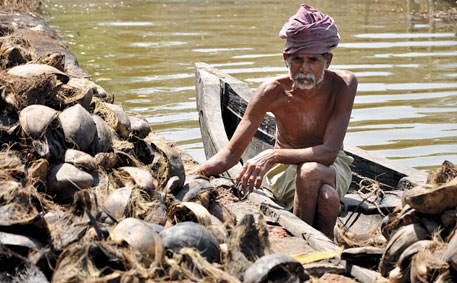 IN THE wake of strong agitations against dumping of municipal waste in at least half a dozen places across the state, the Kerala government in November last year issued an ordinance, making the Municipality Act of 1994 more stringent. The ordinance makes it mandatory to treat solid waste and sewage at the source itself. The ordinance was preceeded by a state-wide sanitation campaign. But neither the ordinance nor the campaign could bring reprieve to Chakkamkandam, a backwater village in Thrissur district. Residents in the village have been living with raw sewage flowing from the adjacent temple town of Guruvayur for more than three decades now.

In the absence of adequate potable water, they are forced to drink water contaminated with human excreta. To worsen their woes Guruvayur municipality has hastened the long-pending construction of a sewage treatment plant (STP) in Chakkamkandam, ignoring the concerns of residents and warnings by experts. They say an STP along the backwaters will turn it into a sewage lagoon.

Chakkamkandam residents’ miseries began as Guruvayur, famed for its Krishna temple, emerged as one of the major pilgrim centres in south India. Today the temple is the fourth largest in the country in terms of number of devotees. According to Guruvayur Devaswom, the temple administration board, on an average 20,000 people visit the shrine every day. As many as 1,000 hotels, lodges, restaurants and wedding halls cater to the needs of the visitors.

“Most commercial establishments and apartments in the town do not have properly functioning septic tanks and discharge the raw sewage directly into two open drains,” says C F George, a retired teacher and staunch activist of Chakkamkandam Drainage Action Committee, which is spearheading the struggle against mismanagement of municipal waste. The drains, Valiyathod and Cheriyathod, flow three kilometers through the town before joining the backwaters of Chakkamkandam.

The Chakkamkandam backwaters is part of the Thrissur wetland which falls in the Vembanad Kole wetland identified as a Ramsar conservation site.

Until some two decades ago, the backwater used to be the lifeline of this village and five other downstream gram panchayats. Most people in the region eked out a living through fishing, coir retting, taking silt from the backwaters for manure and farming. Pokkali, an organic rice variety cultivated in saline, marshy coastal stretches of the central Kerala, used to be the main crop.

Hardly anyone grows pokkali these days. The fisherfolk and coir workers are the hardest-hit. “We get skin rashes and sores when we get into the water,” says Kumaran Chulliyil from Chikkamkandam. Most of the coir units, dotting the seven-kilometre stretch of backwater, have been closed down. Fish catch has reduced considerably.

“Several common fish have gone extinct. Even if we manage to catch some, there are not many takers for the fish from theetta kkaayal (shit lake),” says Gopinath P, another resident. “Whatever little we earn, we spend on medicines.” People here live in the midst of black, thick, stinking sewage, says Laila Hamsa, a former member of Thykkad panchayat council and convener of the committee. Chakkamkandam is part of Thykkad gram panchayat. During the monsoon, when the drain overflows, excreta gets deposited in the courtyards. 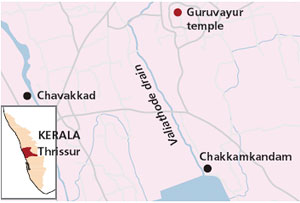 Decades of raw sewage discharges into open drains and backwaters has contaminated the groundwater. In November 2009, the Kerala State Pollution Control Board (PCB) tested water samples from 12 wells in Chakkamkandam. The results indicated faecal contamination with very high count of coliform bacteria. The board had asked people not to drink well water. The municipality has been providing Chakkamkandam residents with piped water since 2010, when the village was attached to the municipality. “But the supply is irregular and irratic,” says K A Sreedharan, whose well, according to PCB officials, cannot be used even after disinfecting.

Studies indicate that open discharge of raw sewage has also contaminated groundwater in Guruvayur. In 2008, an independent fact-finding team of engineers and scientists studied the municipality area. Even the temple tank was found to have high faecal coliform count—1,100 per 100 ml of water against the permissible limit of three per 100 ml. A petition filed before the ombudsman for the local self government institutions early this year by the Association for Public Welfare & Social Justice, a rights group, says wells and other water sources within one kilometre of the temple are highly contaminated, seriously afflicting the health of the residents.

“This is a criminal action of the municipality,” says George.

Municipal authorities say the allegations are exaggerated. “Only a few old hotels and lodges are without proper septic tanks,” says T T Sivadas, chairperson of the municipality council. For all the new ones, he says, the municipality insists on setting up waste treatment facilities.

But he contradicts himself by saying that all lodges, rest houses and public comfort stations under Guruvayur Devaswom discharge their sewage directly into the drains. “Guruvayur devaswaom is very rich. Still it does not take proper waste management measures nor does it make financial contributions for sanitation work,” Sivadas alleges.

If the temple administration violates the rules, why the municipal council does not take action against it, says George. Activists point out that the licences of erring establishments hardly get cancelled as some of the lodges and hotels are owned by municipal council members and their relatives. Besides, there is unholy nexus between politicians and hotel and lodge owners.

The municipality now highlights the STP, being constructed at Chakkamkandam since 1995, as the solution to the issue. But the plant has a capacity of three million litres a day, which is just sufficient to treat the sewage generated by 1.4 sq km around the temple, or around three per cent of the total municipal area. “We hope to complete the work in six months,” says Mathews Philip, environmental engineer in-charge of the plant. The treated effluent from the STP will be released into the backwaters and can be used for agricultural purpose, he adds.

Chakkamkandam residents have been opposing STP since it was proposed in 1974, saying it will only compound their plight. They say the plant was originally proposed to be set up in Kalathode in Guruvayur municipality. But the site was close to a political leader’s home. So the authorities shifted it to Chakkamkandam, ignoring that the village is thickly populated. The villagers fear if the STP leaks—which is more likely because the main pipes of STP were laid in the 1970s and have reached the end of lifespan—it would further pollute the wetland and fill the area with obnoxious stink. George alleges that the municipality is constructing STP by filling a hectare of the backwaters, which is under Coastal Regulation Zone I and without an environment impact study.

A study by the Kerala Forest Research Institute in Thrissur district in 2010 pointed out that construction of the STP had destroyed mangroves in the area. Fish and birds would be directly affected as effluents from the STP would alter salinity of the backwater. The study notes that short-sighted interventions can destroy the fragile eco-system. Activists ask why does the municipality want to set up a centralised STP, spending Rs 20 crore and violating the Municipality Act? Why does it not make the establishments in the municipality abide by the laws?

On February 22, ombudsman for local bodies asked the municipality to state what action it has taken so far for controlling the discharge of direct excreta into open drains and submit a time-bound plan for solving the issue.