NASA scientists have developed a new space-based imager with very high resolution which will help foresters, farmers and geologists, and lay the foundation for future land-imaging systems 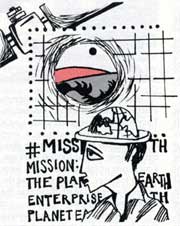 WITH the new millennium just round the bend, the National Aeronautics and Space Administration (NASA) has dedicated several missions for a planet it did not care for much before - Earth. Dubbed 'The Planet Earth Enterprise', the project seeks to implement NASA's space-age technology for life on earth.

An advance, lightweight scientific instrument designed to produce visible and infrared images of the earth's land surfaces has been selected as the focus. The Advanced Land Imager (ALI) Will demonstrate remote-sensing measurements consistent with the data collected since 1972 through the Land Sat series of satellites. The data is used by foresters, farmers, geologists and a host of other people for monitoring and assessing terrestrial resources. It would also acquire data with finer spectral resolution and most importantly, lay the technological groundwork for future land imaging systems.

ALI cuts down mass and electrical power usage almost seven-fold, compared to the current LandSat 5. In addition, ALI is equipped with 'a spectrometer on chip'- a wide field observing system on an integrated silicon carbide chip with automatic, in-flight optical calibration system. The institutes marked out for putting ALI in final shape are NASA's Goddard Space Flight Center in Greenbelt, Maryland, and the Lincoln Laboratory at the Massachusetts Institute of Technology, both in the us.

The instrument will have a resolution of 10 rn in the black- and-white range (i.e., locations on the earth surface can be scanned with an accuracy of 10 m) and 30 rn in other spectral ranges. Charles Kennel, NASA's associate administrator for the Planet Earth Enterprise is optimistic, " It will open up new windows in areas like precision vegetation and more accurate mineral identification." ALI will be programmed to fly a little in a4vance of the LandSat 5 in use now and, thus, would be handy for a study of comparative data. The space craft sup port structure, including advanced electrical power and data-handling soft ware, would be provided by Litton Iudustries of Greenbelt, Maryland. NASA has 0also given the license to Litton Inc to commercialise the technology after a couple of years.

The Topex/Poseidon satellite (a joint venture Of NASA and the Centre Nationale d'Etudes Spatiales, the French space agency) focuses on studying wave patterns in the oceans. Largescale ocean waves, typically a few hundred miles in wavelength, is the most important key to global weather forecasting - a fact that's known for long, but, as yet, one of the least understood areas of climate research. These waves, termed by the generic name 'Rossby Waves', carry a 'memory' of weather changes at distant locations over the ocean.

A natural result of the earth's rotation around its own axis, these waves are also a key feature of largescale ocean circulation. The poseidon data reveals that the waves are almost thrice as fast than previously thought. These waves alter current patterns and corresponding ocean surface temperatures and thus, influence the way oceans release heat to the atmosphere. The precise information about how fast and how high these waves are, would enable forecasters to predict changes in global climate patterns years in advance.

NASA's most futuristic project of the Planet Earth Enterprise is setting up a National Space Biomedical Research Institute (NSBRI). The institute will support a wide variety of basic and applied biomedical research in space and use that knowledge effectively to enhance life on earth. The next century may well be one of industrial and technological revolution, and NASA would play no mean part.