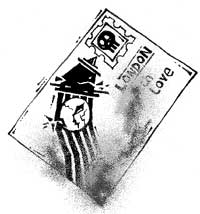 if British models for monitoring air quality are anything to go by, then the concept of air pollution could very well be given a miss. Most models give an almost picture postcard image of the British skyline in the coming years, despite the increasing number of vehicles on its roads.

Such are the models, that local authorities are approving projects that are likely to breach pollution goals for the year 2005, which were laid down by the government as recently as last August. One of the models is the widely used Design Manual for Roads and Bridges (dmrb) produced by the now privatised Transport and Road Research Laboratory. Says a city planner, "Whatever development you propose, the model always predicts that air quality will improve. Effectively this means that traffic pollution ceases to be an issue in any planning application, even a major road."

The government undertook the study of the air quality monitoring models last year after local authorities voiced their misgivings about the efficacy of the models. Authorities are now testing the models by comparing their predictions with real pollution levels. The findings will be presented this month to the department of environment. Preliminary reports suggest major loopholes in the functioning of the models which include dmrb.

Government data on pollution, its future predictions on the amount of traffic using diesel and undue optimism placed on the role of catalytic converters in reducing emissions are also responsible for the models' display of clean air in the future. Data on catalytic converters especially needs to be revised as it is slowly coming to light that they are not having the expected beneficial impact on air quality. "About a third of the national car fleet should now have been fitted with catalytic converters, and we should ideally expect a significant improvement in air quality. But last year, nitrogen dioxide levels here were worse than in 1992," laments Gavin Tringham, head of Birmingham's environmental protection unit.

Where the dmrb model errs is in assuming that catalytic converters are forever efficient. Catalytic converters when fitted to car exhausts turn nitrogen oxides to nitrogen, and unburnt hydrocarbons and carbon monoxide into carbon dioxide and water. They are expected to reduce nitrogen oxide emissions by 95 per cent. However, they require regular maintenance, and their work efficiency is much less when the engines are cold or operating at low speeds. "This means they are much less effective in urban areas," says Matthew Ireland, an air pollution consultant who advises the national society for clean air on modelling. "But this is not fully reflected in some of the models."

Concludes Bernard Fisher, professor of environmental modelling at the University of Greenwich, "The dmrb model was designed for rural motorways, not urban streets. It assumes that most car engines are running hot, and that the catalytic converters work properly. It is an extremely simplified model, which makes some gross assumptions."