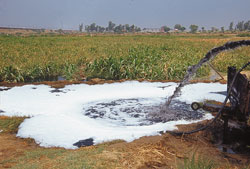 mohan Meakin Limited (mml) was in the news recently. But for all the wrong reasons. The Central Pollution Control Board (cpcb) had ordered the distillery to be shut down in early May 2002 on the grounds that the unit was not following norms for the discharge of its effluent. The distillery was recently reopened after an assurance from mml that it will follow the prescribed norms.

"As per the norms, the discharge of one kilolitre (kl) of effluent requires nine hectares (ha) of land. But we found that mml did not have enough land for the disposal of its effluent. Also the effluent treatment plant (etp) was not functioning satisfactorily," says Dilip K Biswas, chairperson, cpcb.

mml first hit the headlines on May 2, 2002, when a report stated that its effluent was polluting a wetland. "A cpcb team visited mml on May 4, 2002 and found anomalies in the effluent's biological oxygen demand (bod)," says K C Rathod, senior environmental engineer with cpcb. Along with the Indian Agricultural Research Institute (iari), cpcb has developed standards for bod in industrial effluent discharged in river (30 milligrams per litre (mg/l)) and land (100 mg/l). Most distilleries try to discharge their effluent in land because the standards are less stringent, says cpcb.

But mml claims it has been implicated on 'frivolous grounds'. "Though we have only 67 ha of land as against the required 91 ha, the bod of our effluent is much lower (around 50 mg/l) than the prescribed limit," says Pushpinder, manager, mml.

He blames the adjacent Anand industrial area and Arthala village for polluting the area, as they openly discharge their effluent into the nearby ponds. cpcb and Uttar Pradesh Pollution Control Board (uppcb) officials accept this. "We have already told the upccb to survey the adjacent areas of mml and develop an effluent disposal system for them," says Biswas.

cpcb has, meanwhile, added a few clauses in mml's operation. "In keeping with 67 ha land with mml, we have allowed its etp to function up to 7.5 kilo litres per day (kl/d), as against the total capacity of 10 kl/d. Effluent cannot be discharged into the Hindon river. mml must also enter into an agreement with farmers whose lands abut its field and where excess effluent can overflow," says Biswas. Company sources say that they have already done this.

But the problem of pollution from distilleries is far from over. "We realise that just blaming one industry is not enough and concerted action is required," says Biswas.