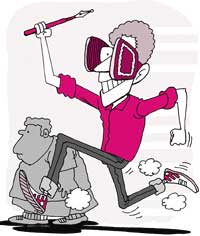 The following headlines were splashed across newspapers in the us recently: "Being chubby means you may be healthier," "Pleasantly plump may be ok " and "It's ok to Be slightly overweight, study says." The news articles were reporting results of a study published in the April 20 issue of the Journal of American Medical Association. The us-based based organisations, National Cancer Institute and Center for Disease Control and Prevention used data from the country's National Health and Nutrition Examination Survey and found that the death rate of the obese category was far more deaths compared to the underweight category and even the normal weight category. The fact that overweight people had a lower death rate than people with normal weight was subject to a lot of ifs and buts. It was as if after having to write about adverse effects of obesity for long periods, the authors just went overboard.

The authors accept that they did not look at issues such as quality of life in the study. Other factors associated with body weight, such as physical activity, body composition, visceral adiposity and physical fitness were also not considered. Surely, these reasons would explain at least some of the deaths linked with being underweight. The article did put in a mention of these omissions, but the news articles have not picked them up.

The authors did not also examine health problems caused by obesity. Umpteen number of studies have shown that being overweight and obese leads to morbidity and disability. The scientists also seem to have forgotten another basic: low death rates are related to the improvements in public health facilities. But what good is a long life if it's spent in gulping down medicines to deal with obesity-related afflictions.