Primatologists of the peninsula unite under a new Indo-US project 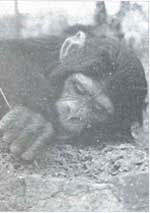 THE study of primate field biology in India is all set to take off with the newly launched Indo-US Primate Project. Illegal trade in monkeys, study of habitat and population dynamics of the 17 primate species found in India and their geographical distribution will be some of the thrust areas of the Primate Project Group.

The project is a collaborative programme between the MEF and the US Fish and Wildlife Services, with the JNV University, Jodhpur, as the nodal agency. Funded by the United States India Fund -- Rs 1 crore for a period of 5 years and more grants if the study is extended -- it aims to bring together primatologists in India and pool their expertise with foreign researchers.

A core group of 8 members is supported by consultants drawn from different universities, forest departments and NGOs. Project work began in December 1994, through population surveys of primate species in northeast India and the Kumbalgarh sanctuary in Rajasthan.

Says S M Mohnot of JNV University and director of the Indo-US Primate Project: "The purpose of the Projects Primate Group is to initiate long-term studies in India to understand the ecology and behaviour of non-human primates. To ensure conservation of the primates, we will identify areas in immediate need of attention that should be declared as wildlife sanctuaries".

Iqbal Malik, a primatologist and a consultant with the Primate Group, says that the project can work out conservation strategies for both common and endangered primate species such as the lion-tailed macaque and Nilgiri langur.

At the first Primate Group meeting held in the capital on March 23, an attempt was made to assess the behavioural aspects and conservation strategy for primates. Under the project, Kamrup and Panbari near Kaziranga in Assam have been identified as reserved areas.

The project is also collaborating with institutes which use primates for biomedical research, such as the Central Drug Research Institute, Lucknow, the Centre for Cellular and Molecular Biology in Hyderabad, and the All India Institute of Medical Sciences, New Delhi.

Says Arun Srivastava of JNV University, currently working as a field biologist in northeast India, "Each research group or individual has been working in isolation so far with no sharing of knowledge." The project will now bring various primatologists under one umbrella and create a centralised research base.