New species found in the rainforests of Congo basin 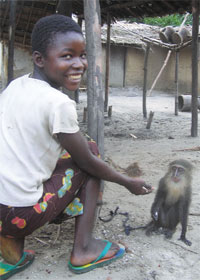 TO THE surprise of the scientific community, a new type of monkey has been discovered in a region where the first humans roamed and which is still densely populated. The monkey has been christened as Cercopithecus lomamiensis after the Lomami river in the rainforests of the Democratic Republic of Congo (DRC), on whose banks it is found. It belongs to a group of Old World monkeys known as guenons.

This is the first primate discovery reported from Africa in almost 30 years. Astonishingly, guenons are a relatively well-known group, with 25 known species. In 2007, John Hart of the Lukuru Wildlife Research Foundation in Congo and his colleagues first saw a juvenile monkey of the species kept captive in a remote village in the Congo River Basin. With a yellow mane, bright red markings on its lower back and bright blue haunches, the animal was unlike any other monkey they had ever seen. Later, genetic tests revealed it was a new species. It turned out that the species, known locally as ‘Lesula’, is well-known to local hunters. Its closest relative is the owl-faced monkey, Cercopithecus hamlyni, found two rivers away and previously thought to be the only one of its kind.

The researchers say the monkey is restricted to extremely dense lowland rainforests in Congo. The region was largely unexplored till now and this might be why the semi-terrestrial animal was not spotted.

“Such discoveries indicate that we are still far from documenting the extent of biological diversity, even for well-known groups like primates,” says Narayan Sharma, a research scholar at the National Institute of Advanced Studies in Bengaluru, who has been studying macaque populations in north-east India for eight years.

The study was published in PLOS ONE on September 12. The researchers have also spotted three other endemic primate species in these forests. They say the discovery highlights the biogeographic significance of the region ranging from the upper Tshuapa river through the Lomami Basin to the Congo river. The Lukuru foundation is working with the Congolese authorities to establish a national park in the basin before it loses its unique biodiversity.

Anindya Sinha, a renowned primatologist, feels that given the current rate at which species are going extinct, it is time that we give up the obsession with discovering new species and turn our attention towards maintaing the populations of those that are already there. He says that the variability in the demography, ecology, behaviour and genetics of animal populations needs to be analysed and understood. “Only that understanding would lead to effective conservation,” says Sinha.