Monks battle to save forest 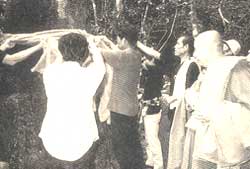 THAILAND'S war against communist insurgency ended early in the 1980s. But now, villagers in Buriram province are battling to save the area's last rain forest - ravaged during operations to flush out rebels - from government agencies and private businesses looking for profit. The efforts of the villagers of Pakham district are being supported not only by academics and NGOs but also by Phra Prachak Kuttajitto, abbot of the Hua Nam Pood forest monastery.

Phra Prachak's support for the villagers in their struggle to save the Dong Yai National Reserve Forest that surrounds the Hua Nam Pood mountain has brought him both national acclaim and a slew of troubles. Thailand's Royal Forestry Department (RFD), the Thai army and the local police have branded Phra Prachak an agitator and trouble-maker. He has been charged with encroaching on forests, promoting illegal assembly, physically assaulting a police officer and creating unrest. In April 1991, he was arrested and threatened with disrobement. Many attempts have been made on his life and one assassin who infiltrated the forest monastery as a monk eventually confessed his intentions and began training as a novice monk.

When Phra Prachak arrived in Dong Yai Forest in 1988, the intensity of the villager's conflict with the RFD over commercial reforestation with eucalyptus plantations was increasing. He was shocked by the massive forest destruction and moved by the villagers who, he says, "were hungry for a monk, for someone to lean on." Phra Prachak immediately decided to remain in Dong Yai and declared the forest a Buddhist meditation retreat. He began 'ordaining' the largest trees of the forest and wrapped them with saai sin, the holy yellow thread of the Buddhist clergy. The Hua Nam Pood mountain was dedicated as Khet Apaiyataan (land of forgiveness) to be the heart of the Buddhist sanctuary, where tree-felling and the killing of wild animals was prohibited.

In 1989, leaders from Pakham's 25 villages set up the Hua Nam Pood Mountain Conservation Group to monitor and deter illegal logging activities. Roads used by loggers to take timber out of the forest were blocked and forest areas were demarcated with red paint to stop further encroachment. Fines were imposed for cutting trees in the sanctuary.

The reaction from the logging interests was predictable - their henchmen fired guns in the village at night to scare the monk and the villagers into submission. Local officials visited the monastery and asked the monk to leave the district. When the scare tactics increased, the angry villagers reacted by protesting against nearby eucalyptus plantations, cutting down 200,000 saplings and torching two nurseries and one million baht (Rs 1.12 million) worth of RFD property.

The intimidation did not end there. Local army units and police descended on the Pakham villages and Phra Prachak and 67 villagers were threatened with arrest on charges of trespassing on state lands. The charges stemmed from the villagers' use of the forest as a source of food and fuel and for grazing cattle. In response, the abbot invited monks working with villagers in other areas and conducted a religious ceremony that focussed on the concept of forest conservation.

Phra Phrachak's says that the fight for the forest is a test of his spiritual training - to be able to retain peace within despite outside turbulence.

"I've learned that the villagers have already realised the value of the forests. And they have done their best to preserve their sources of livelihood....it's the men in uniforms and in power that are behind forest destruction."

Phra Prachak is renowned throughout Thailand and is one of a growing number of Buddhist monks in the country whose mission is to live in harmony with nature and teach people the value of the forests. The survival of Thailand's remaining forests depends largely on the ability of the monks to resist the government and private sector's plans to turn the country's forest area into eucalyptus plantations and golf courses.