The Advertising Standards Council of India has upheld complaints against Mahyco-Monsanto’s advertisement for Bollgard II, a Bt cotton variety, in Hindustan Times on August 30, 2011. The complaint was filed by Rachna Arora of non-profit Public Awareness on Genetically Modified Food on the same day. 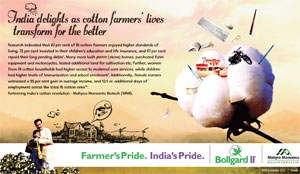 The ad showed how farmers using the GM crop were profiting due to low bollworm attack and higher yields. Arora had asked the ad to be stopped as it was giving wrong information. She challenged the claims on reduced insecticide usage, in-built plant protection, higher yields and increased income of farmers by Rs 31,500 crore, and said the claims are false or unsubstantiated. “The council’s decision is a vindication of our stand,” she says.

The biotech giant has taken cognizance of the points made by the council. It has modified the version of the ad, which says: “The benefit of Bt cotton technologies in-built plant protection in high-yielding hybrid cotton seeds along with improving farming inputs and favourable market conditions has helped create Rs 31,500 crores additional value for 60 lakh cotton farmers by significantly reducing insecticide usage and increasing yield.”