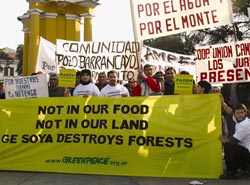 Biotech giant Monsanto will participate in the drafting of a new legislation to regulate the trade of genetically modified (gm) seeds in Argentina. Monsanto (us) had recently complained about non-payment of royalties by the country's farmers who used the Roundup Ready soya seeds for which Monsanto held the patent. It had warned that it would collect the royalties at the ports. Argentina's agriculture secretariat had condemned the pronouncement, saying such a move would amount to extortion.

Argentinian authorities held meetings with the company's representatives to settle the matter, following which the decision was taken. Argentina is the second-largest producer of gm soya in the world, after the us. But less than half of the farmers who use Monsanto-patented seeds pay the royalties.