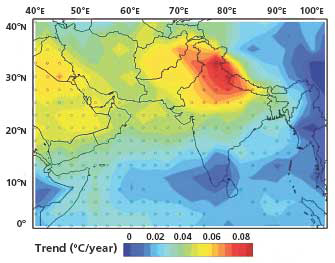 Central, northern India have a new date with the rains

april, May and early June may be the future monsoon months of north and central India. As of now, the official date for the beginning of monsoons is June 29. But there has been a clear increase in rainfall in the months preceding June. This is because the atmosphere in north India is warming at a rate much faster than the rest of the country.

Temperatures in the Himalayan-Gangetic region have increased by 2.7C between 1979 and 2007 in the pre-monsoon months, said a study carried out by the University of Maryland, nasa and Chapman University, California, US.

The team found that during April, May and early June, dust aerosols (pollutants that remain suspended in the air) from the Thar desert and West Asian desert regions are transported to north India."Carried by the westerly winds hitting the Himalayan slopes, the aerosols spread across the Indo-gangetic plains," said Ritesh Gautam, scientist at the University of Maryland and lead author of the study.

The thick layer of dust absorbs the sun's rays and acts as an additional heat source. While passing over industrial areas, the aerosols are coated with carbon particles, like soot. This increases their ability to retain heat. As a result, the temperature of the upper atmosphere increases. This, in turn, increases the temperature difference between the land and the sea and advances the transport of rain-bearing winds to north India during April, May and early June, said the study pulished in Geophysical Research Letters on April 9.

Reiterating the find, K M Lau, scientist at nasa and an author of the study, said, "There is a pronounced increase in rainfall over northern, central and western India in May-June, and a subsequent decrease in July and August."

The decrease in rainfall during the monsoon months (July-August) has been explained earlier in a study published in the World Meteorological Organisation Bulletin in January, 2009. As the aerosol layers build up, an atmospheric barrier is created that prevents the heat from reaching the earth's surface. In late June and July, the aerosol accumulation is at its peak. The atmosphere heats up but surface cooling increases. This leads to decreased rains in monsoon months.

Not everyone agrees with the theory linking aerosols to the monsoon pattern. "We don't have clear evidence to prove monsoons are occurring early. There is no analysis of long-term aerosol data," said M Rajeevan, scientist at the National Atmospheric Research Laboratory, Tirupati.